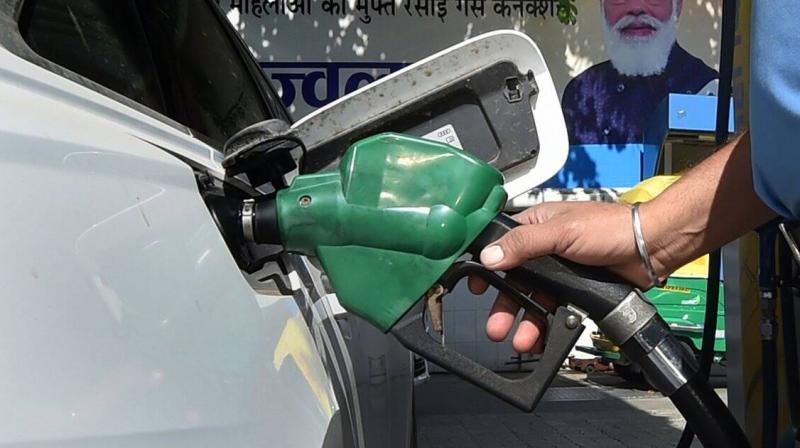 New Delhi: Petrol and diesel prices were hiked by 80 paise a litre each on Saturday, the fourth increase in five days as oil firms passed on to consumers the spike in cost of raw material.

Petrol in Delhi will now cost Rs 98.61 per litre as against Rs 97.81 previously while diesel rates have gone up from Rs 89.07 per litre to Rs 89.87, according to a price notification of state fuel retailers.

All the four increases since the ending of a four-and-half-month long hiatus in rate revision on March 22, have been of 80 paise a litre. These increase increases are the steepest single-day rise since the daily price revision was started in June 2017.

In four increases, petrol and diesel prices have gone up by Rs 3.20 a litre.

Prices had been on a freeze since November 4 ahead of the assembly elections in states like Uttar Pradesh and Punjab -- a period during which the cost of raw material (crude oil) soared by about USD 30 per barrel.

The rate revision was expected soon after assembly elections ended on March 10 but it was put off.

Oil companies, who did not revise petrol and diesel rates for a record 137 days despite prices of crude oil (raw material for producing fuel) rising to USD 117 per barrel compared to around USD 82 in early November, are now passing on to consumers the required increase in stages.

CRISIL Research said a Rs 9-12 per litre increase in retail price will be required for a full pass-through of an average USD 100 per barrel crude oil and Rs 15-20 a litre hike if the average crude oil price rises to USD 110-120.

India is 85 per cent dependent on imports for meeting its oil needs and so retail rates adjust accordingly to the global movement.