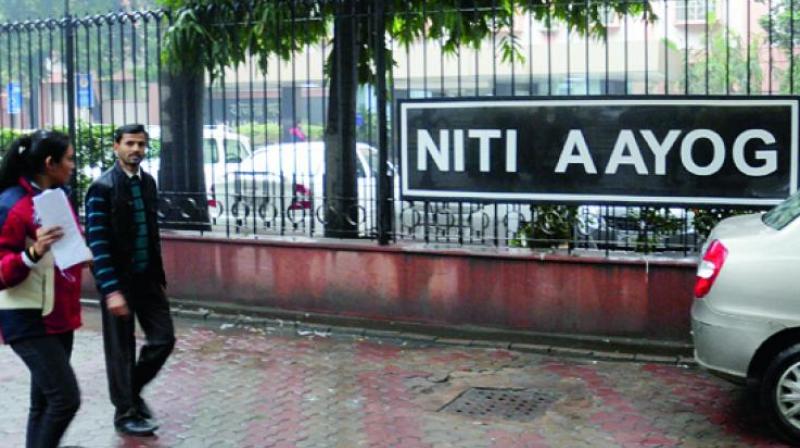 Aayog pointed out that unifying the existing large number of labour laws into four codes without reform of the laws themselves will serve little purpose.

New Delhi: Making a case for promoting highly productive and well paid jobs, Niti Aayog has said that not unemployment but a "severe under-employment" is the main problem facing the country.

The government think-tank in its three-year action plan, released last week, has said that a focus on the domestic market through an import-substitution strategy would give rise to a group of relatively small firms behind a high wall of protection.

"Contrary to some assertions that India's growth has been 'jobless', the Employment Unemployment Surveys (EUS) of the National Sample Survey Office (NSSO) have consistently reported low and stable rates of unemployment over more than three decades.

"Indeed, unemployment is the lesser of India's problems. The more serious problem, instead, is severe underemployment," the Aayog said in the Three-Year Action Agenda for 2017-18 to 2019-20.

"What is needed is the creation of high-productivity, high-wage jobs," it said further.

Citing examples of top manufacturing countries like South Korea, Taiwan, Singapore and China, it said, "The 'Make in India' campaign needs to succeed by manufacturing for global markets."

Noting that with Chinese wages rising due to an ageing workforce and many large-scale firms in labour-intensive sectors currently manufacturing in that country are looking for lower-wage locations, the Aayog said, "with its large workforce and competitive wages, India would be a natural home for these firms."

"Therefore, the time for adopting a manufactures- and exports-based strategy could not be more opportune," it added.

The Aayog in its 'Three Year Action Agenda' also recommended for the creation of a handful of Coastal Employment Zones (CEZ), which may attract multinational firms in labour-intensive sectors from China to India.

"The presence of these firms will give rise to an ecosystem in which local small and medium firms will also be induced to become highly productive thereby multiplying the number of well-paid jobs," it observed.

Making a case for reforming labour laws, the Aayog also noted that recently fixed-term employment has been introduced in the textiles and apparel industry.

"This option may be extended to all sectors. The change will encourage employers to rely on regular fixed-term employment instead of contract workers, especially when hiring workers for specific projects or for meeting seasonal demand," it said.

Besides, the Aayog pointed out that unifying the existing large number of labour laws into four codes without reform of the laws themselves will serve little purpose.

"Unless we bring about substantive change either by amending the existing laws or rewriting them afresh, we cannot expect to change the current situation where low-productivity and low-wage jobs dominate the landscape" it observed.