ICRA says steel consumption to be low in FY17

India's steel imports contracted by 38.5 per cent in 11M FY17 on the back of various trade protection measure. 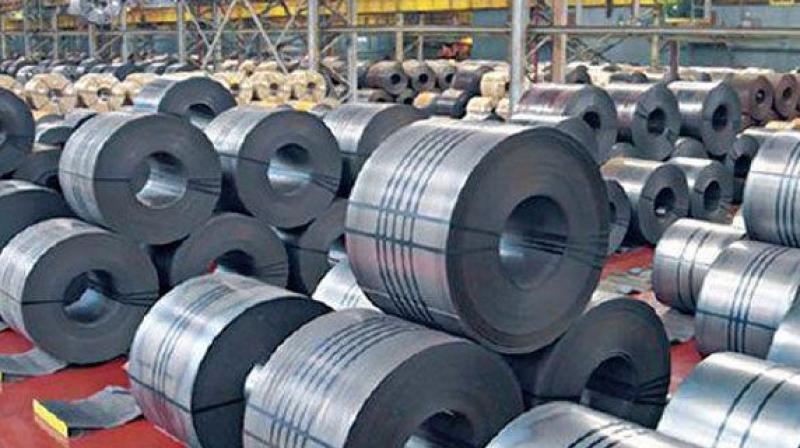 New Delhi: Steel consumption growth is projected to be lower in FY17 than the previous year, mainly on account of sluggishness in real estate and construction sectors, rating agency ICRA said today.

"Sluggish demand in recent months led to a reduction of Rs 2,000/T in domestic hot rolled coil (HRC) prices in February 2017," ICRA said in a report. Though domestic HRC prices have seen an upward revision by Rs 1,000/T in March 2017, and reportedly, the industry is considering a further price increase in April, sustainability of this increase remains uncertain, given that domestic prices are now costlier than landed cost of imports, ICRA said in the report.

Nevertheless, the government's thrust on infrastructure and affordable housing sectors in the Union Budget 2017-18 points to a favourable demand outlook for the steel sector in the medium term.

India's steel imports contracted by 38.5 per cent in 11M FY17 on the back of various trade protection measure  including anti-dumping duty, safeguard duty and minimum import price.

"This decline in steel imports has coincided with a strong growth in steel exports by domestic mills, supported by an improvement in the pricing scenario in international markets.

"As against a wide gap of 7.6 million tonne in FY16 between India's steel exports and imports, exports have surpassed imports in 11M FY17 by a thin margin and as a result, India has now become a net exporter of steel in the current year," Jayanta Roy, Senior VP and Group Head - Corporate Ratings, ICRA said.

In FY17, ICRA expects domestic iron ore production to reach 190 million tonnes, registering a growth of 23 per cent over FY16. A bulk of the incremental domestic production has come from Odisha, where production is expected to cross 100 MT in FY2017.

However, buoyant international iron ore prices have helped arrest the slide in domestic ore prices, especially in the states of Chhattisgarh and Odisha, where prices were under pressure earlier due to oversupply.

"Rising exports augur well for India's pellet capacity of around 90.6 million tonne per annum, which has been operating at suboptimal utilisation levels of around 50% thus far," Roy said.

With the Chinese government partially removing supply restrictions on coal mining from mid-November 2016, Chinese coal production have gradually increased in the December quarter, ICRA said adding, this is expected to lower China's import dependence of coking coal in CY2017.