Business   In Other News  28 Jul 2019  12-yr-old Revant comes out with solutions for traffic rule violators; files 4 patents
Business, In Other News

The other patents relate to a system for preventing or detecting theft of vehicles through a smart key, a pre-installed SIM card. 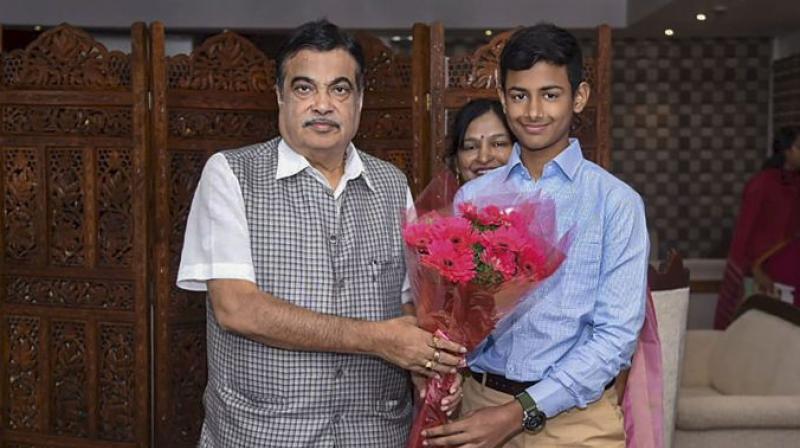 New Delhi: Innovations come naturally to this Maharashtra boy who has barely turned 12 but has already applied for four patents for the apps designed to curb road accidents and vehicle theft.

Road Transport and Highways Minister Nitin Gadkari saw a presentation by this young talent master, B S Revant Namburi, and assured him support to bring the technologies into reality, subject to technical clearances from his department.

A Class 7 student of Mount Litera Zee School in Nagpur, the apps developed by Revant relate to monitoring traffic violations in real time and includes tools like a seatbelt sensor, breathalyser, heart rate analyser, and CPU, designed to store information and alert the authorities.

The second app developed by Revant uses quick response (QR) codes to enable printing of data and document anywhere without the requirement of network connectivity.

Revant says that idea behind the patents is that his technology could be transferred and utilised by the government or any private company for the larger welfare of the society.

Gadkari said his department always encouraged innovators, and innovative technologies could be absorbed to minimise accidents if found right on technical parameters.

Such innovations assume significance in the wake of India accounting for as high as 5 lakh road accidents per annum in which 1.5 lakh people die and another 3 lakh are rendered crippled.

Revant's mother Shilpa Shekhar Namburi, an MD in Ayurveda, said initially she could not notice the potential of his curiosity over issues but soon she realised that his concepts sounded mature and worthy of thorough attention.

She shared an experience as to how a road accident became a driving force behind Revant's curiosity and finding out solutions. She said her car had met an accident after a cargo vehicle rammed into her car despite red traffic light signal and fled the spot and how Revant who was sitting with her in the car was impacted and said why they could not take action against the culprit.

Shilpa said Revant sought two days' time from her and came out with an app to detect real-time traffic violators when he was only in Class 7.

She said that after the incident, she also met Vivek Dahiya, director of Boudhik Ventures Pvt Ltd in Nagpur, which proved to be turning point not in Revant's life rather few more school students.

"It was concluded in the meeting that Team Boudhik will shape Revant's raw thoughts into logical solutions and file patent application/s for each of them after checking patentability threshold of the concept/s. Thereafter, joined efforts of team Boudhik and Revant resulted into filing of three patent applications," she said.

She said Revant happens to be one of the youngest innovators in India to apply for four patents at the age of 12 years.

The Lok Sabha earlier this month passed the Motor Vehicles (Amendment) Bill, 2019, that seeks to remove corruption, improve road safety and use technology to regulate traffic.