Business   In Other News  29 Mar 2020  28-day paid leave for covid19 patients in Noida ; factory workers to get daily wage
India, All India

The order has come amid reports of thousands of daily wage earners leaving for their homes, towns and villages due to a 21-day lockdown 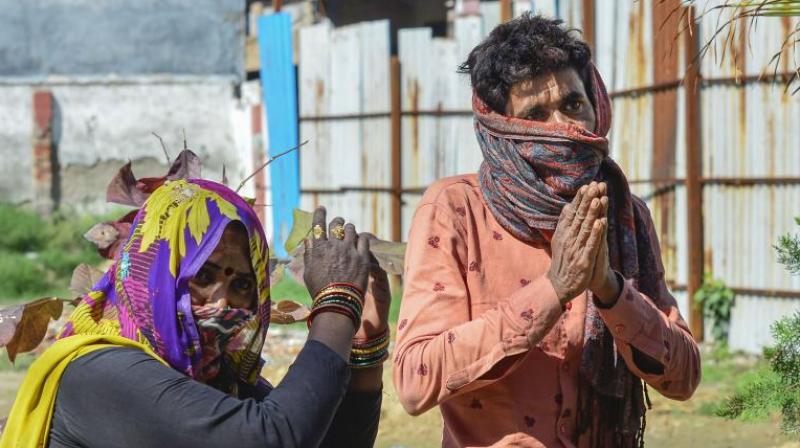 A migrant worker, suspected of coronavirus infection, and his wife beg a policeman to be allowed to go back to their native place, at a soup kitchen set up in New Delhi on March 27, 2020. (Photo- PTI)

Noida: Any worker or employee infected with coronavirus and in isolation for treatment will get 28 days of paid leave from their employer across Noida and Greater Noida, the Gautam Buddh Nagar district administration has ordered.

In an order passed late on Saturday night, the administration also said that shops, industries and factories closed because of the lockdown will have to give daily wage along with leave to their workers and labourers during the closure period.

The order has come amid reports of thousands of daily wage earners leaving for their homes, towns and villages due to a 21-day countrywide lockdown called by the Centre.

Gautam Buddh Nagar District Magistrate B N Singh said the Uttar Pradesh government has already declared the pandemic as a "disaster" and the lockdown has been called with an objective to contain the virus from spreading.

"Workers and employees who are infected with COVID-19 and kept in isolation for treatment will get 28 days' paid leave. This will be done only when such patients produce a certificate of treatment to their employers upon being discharged as healthy," Singh said.

"All such shops, commercial facilities and factories, which have been closed temporarily because of the order of the state government or the district administration, will provide paid leave to their workers and labourers for the duration of the closure," he said in the order.

Arrangement should be made by such establishments to dole out the payments to their workers and labourers on March 30 and 31 or April 3 and 4, depending on their situation to make the payment, the order stated.

Singh said he has invoked the powers vested in him as the district magistrate under the National Disaster Management Act 2005 to issue this order and any violation of it would attract legal action against the offender.

The Noida administration had in an order passed on Saturday asked landlords to collect rent from their worker-tenants only after a month, amid reports of migrants undertaking the journey to reach their native places on foot during the nationwide lockdown.