On Wall Street overnight, stocks plunged to close out their worst quarter since the most harrowing days of the 2008 financial crisis 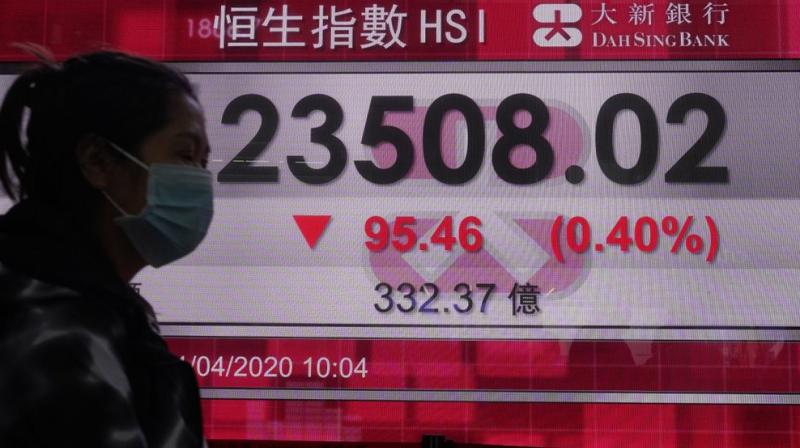 A woman wearing a face mask walks past a bank's electronic board showing the Hong Kong share index at Hong Kong Stock Exchange Wednesday, April 1, 2020. Asian shares were mixed Wednesday, on continuing worries about the economic fallout from the pandemic as reports of coronavirus cases keep surging in various regions. (AP Photo)

TOKYO: Asian shares were mixed on Wednesday, on continuing worries about the economic fallout from the pandemic as reports of coronavirus cases keep surging in various regions.

Adding to the damage was the Bank of Japan’s quarterly survey of business sentiment called “tankan,” which highlighted the gloom over a likely recession. The world’s third largest economy had already been lagging for months when the outbreak began taking its toll earlier this year.

Sentiment among Japan’s large manufacturers fell in the January-March period, marking the fifth straight quarter of decline, according to the central bank. The tankan measures corporate sentiment by subtracting the number of companies saying business conditions are negative from those responding they are positive.

On Wall Street overnight, stocks plunged to close out their worst quarter since the most harrowing days of the 2008 financial crisis.

The S&P 500 dropped a final 1.6%, bringing its loss for the first three months of the year to 20% as predictions for the looming recession caused by the coronavirus outbreak got even more dire. Stocks haven’t had this bad a quarter since the last time economists were talking about the worst downturn since the Great Depression, when the S&P 500 lost 22.6% at the end of 2008.

The surge of coronavirus cases around the world has sent markets to breathtaking drops since mid-February, undercutting what had been a good start to the year.

The Dow Jones Industrial Average of 30 U.S. blue-chip stocks dropped 23.2% for its worst quarter since 1987.

Goldman Sachs economists said Tuesday they expect the U.S. economy to shrink 34% in the second quarter, but recover in the second-half of the year

The number of known coronavirus cases keeps rising, and the worldwide tally has topped 850,000, according to Johns Hopkins University. The United States has the highest number in the world: more than 188,000 people.