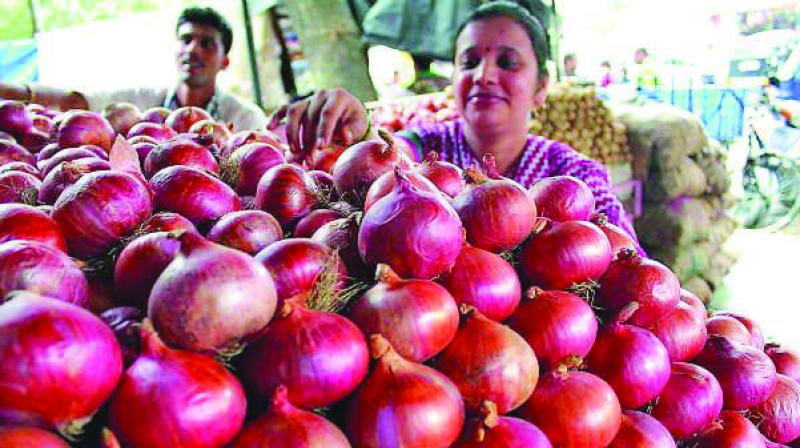 A seven-fold rise in retail onion prices in just five months prompted India last week to set a minimum price of $850 a tonne for overseas sales until the end of 2017.

Mumbai: Asian countries like Bangladesh and Malaysia are struggling to secure supplies of onions after the world’s biggest exporter India restricted overseas sales amid limited availability in the global market.

Onions, an essential part of the diets of millions of Asians, are likely to remain expensive and scarce for at least two months until India lifts curbs on exports, traders said.

“At the moment, there is nothing we can do but to wait,” said Mohammad Idris, a trader based in Dhaka, Bangladesh, where onion prices have trebled in recent months, hitting an all-time high of 100 taka ($1.22) a kg (2.2 pounds) this week.

“We are hoping the price of onions will come down in India once their new harvest hits the markets,” Idris said.

Onions grab space in almost every Asian kitchen as they are used as the base for traditional dishes such as biryani in Pakistan, belacan in Malaysia and fish curry in Bangladesh.

A seven-fold rise in retail onion prices in just five months prompted India last week to set a minimum price of $850 a tonne for overseas sales until the end of 2017, well above the prevailing market price of $700 a tonne.

“Only a few importers are willing to pay $850 per tonne. Exports have dropped substantially,” said Ajit Shah, an Indian exporter based in Mumbai. India was exporting onions at an average price of just $186 in July.

The shortages come after record supplies last year prompted farmers in India and Pakistan to slash the area given over to the pungent bulb during the summer season after incurring losses.

India exported 2.4 million tonnes of onions in 2016/17, mainly to Bangladesh, Malaysia and United Arab Emirates. Other exporters include Pakistan, China and Egypt.

“The Department of Plant Protection is not issuing health certification required for onion exports for the last two months. There is no legal notification to ban the exports, but it’s sort of an informal ban,” Ahmed said.

Buyers from importing countries like Malaysia, Bangladesh, Sri Lanka, United Arab Emirates, Indonesia and Nepal are now looking to China and Egypt for supplies, but these countries could not supply enough.

“All the countries that produce onions have shortages. So even if you go to China to buy, you can’t get as much as you want,” said a Kuala Lumpur-based official with a leading Malaysian farm commodities importing firm.

Indian supplies were preferred by Asian buyers due to flavour, lower freight charges and prompt delivery.

“It takes more than one month to get the delivery when it comes from Egypt and about 20 days from China while it takes only a few days from India,” said Dhaka-based Idris.

Onions have three crops a year, and the supply from the late summer season crop will start to rise in December and could help to moderate prices, Gupta said.

However, industry participants said the new season crop will provide only a tiny surplus and India would look for a substantial drop in local prices before easing export restrictions.

This was likely to take two months when supply from the late summer crop peaks.