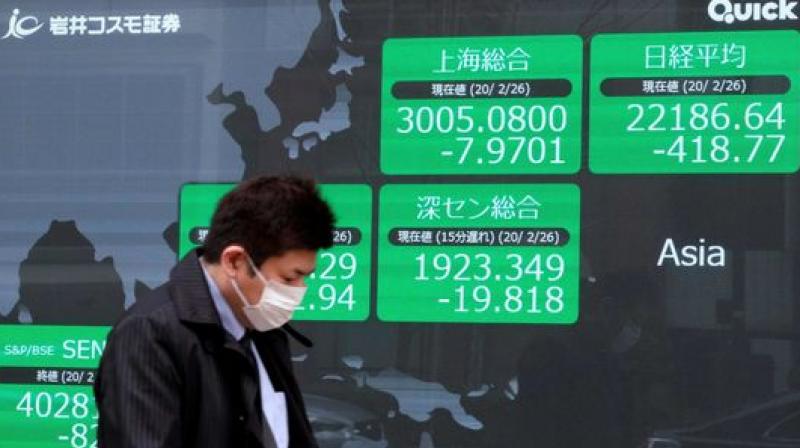 Hong Kong: Equity markets fell in Asia on Thursday, tracking a sharp drop on Wall Street as the deadly coronavirus sweeps the planet, with the infection rate fast approaching one million and forcing countries to tighten already strict lockdown measures aimed at containing the disease.

After two weeks of much-needed gains fuelled by trillions of dollars in stimulus and widespread monetary easing, traders' focus has returned to the devastation wrought on populations and the long-term impact of the pandemic.

Donald Trump's COVID-19 task force has warned the US could see almost a quarter of a million deaths and the president warned of a "horrific" couple of weeks ahead.

His sobering comments came as a number of countries said they would extend lockdowns, which have already gouged economies around the world.

Adding to the unease on trading floors was a report saying China had masked the true extent of the virus in the country, which is just coming out of an extended shutdown.

"The incremental news on the virus in the last 24 to 48 hours has been disappointing," John Porter, at Mellon Investments Corp., told Bloomberg TV.

"The global economy has hit a wall, there's a tremendous amount of uncertainty, and that's contributing to the volatility in the markets and the downward trajectory we've seen the last few days."

US and European markets fell around four percent Wednesday, with investors ignoring data showing far fewer private-sector jobs were lost last month than were expected. Eyes are on the release later in the day of US jobless claims figures for last week, which some estimates have put at a mind-boggling 6.5 million.