The moves extended a dour start in May which began on Friday with bleak U.S. data and the threat of fresh trade-war hostilities 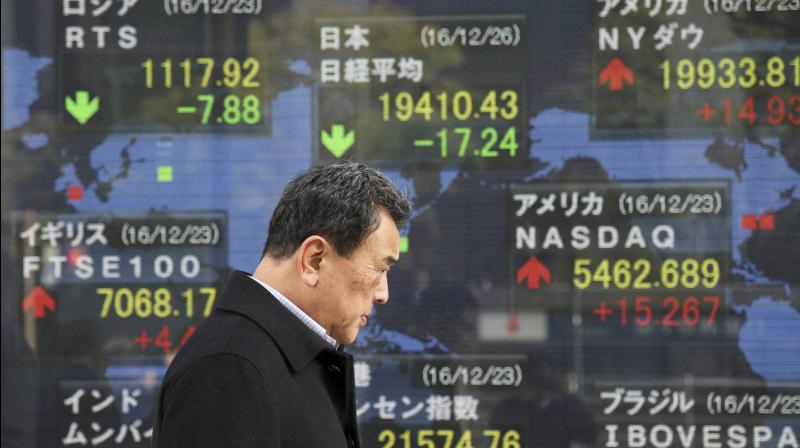 SINGAPORE: The dollar inched higher, stock markets struggled for traction and oil fell on Monday as a U.S.-China spat over the origin of the coronavirus put the brakes on optimism about an economic re-start as countries around the world ease restrictions.

South Korea’s KOSPI fell, Hong Kong’s Hang Seng returned from a two-session holiday with a 3.5% drop, while Australia’s ASX 200 eked out a 0.5% gain.

The moves extended a dour start in May which began on Friday with bleak U.S. data and the threat of fresh trade-war hostilities between the world’s two biggest economies.

U.S. President Donald Trump and Secretary of State Mike Pompeo added to worries with fresh efforts to pin blame for the pandemic on China, where the new coronavirus outbreak is believed to have originated.

The latest salvo came from Pompeo on Sunday who said there was “a significant amount of evidence” that the virus emerged from a laboratory in the central Chinese city of Wuhan.

Pompeo did not provide evidence, or dispute a U.S. intelligence conclusion that the virus was not man-made. But the comments double down on Washington’s pressure on China as U.S. deaths and economic damage mount.

“The risk of a pullback has increased this week,” said Chris Weston, head of research at Melbourne brokerage Pepperstone.

“The United States is not alone in publicly taking aim at China, but whether it’s Trump, Kudlow or Pompeo the narrative is more frequent, and traders are selling yuan,” he said.

With Chinese markets shut on the mainland, offshore yuan extended Friday’s slump to hit a six-week low of 7.1560 per dollar before clawing back to flat.

Benchmark U.S. 10-year Treasuries hardly budged from elevated levels, with the yield holding at 0.6181% as demand for safe-haven assets was firm. Gold steadied at $1,696.41 per ounce.