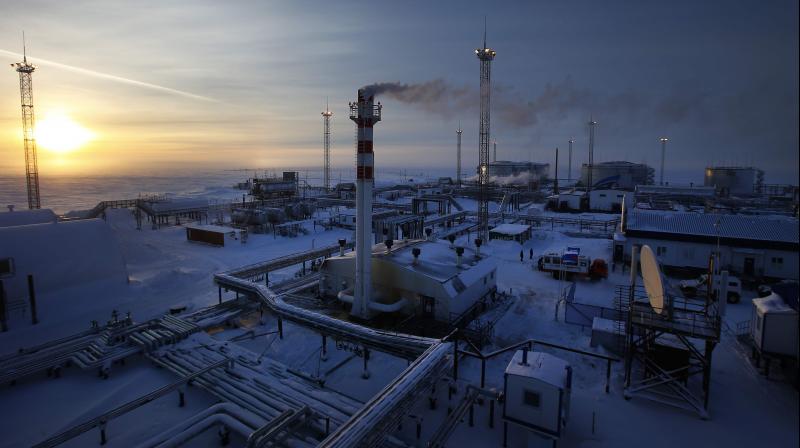 Storage facilities of Novoprtovskoye oil and gas condensates oilfield of Russian gas and oil giant Gazprom at Cape Kamenny in the Gulf of Ob shore line in the south-east of a peninsular in the Yamalo-Nenets Autonomous District. (AFP Photo)

US benchmark West Texas Intermediate fell about eight percent to trade at $18.19 a barrel.

Oil markets have been in turmoil for weeks as the virus strangles demand due to business closures and travel restrictions, with US crude at one point falling into negative territory for the first time.

Prices staged a massive rally last week, with WTI surging 25 percent two days in a row as top producers started slashing output in line with a major deal, while there were also hopes for a pick-up in demand as economies slowly reopen.

But they pulled back Monday as caution returned to markets, tracking a fall in Asian bourses.

Analysts said trading was muted as dealers took a breather following the strong gains but were optimistic that markets would find support again soon.

"With demand devastation plumbing the depths, any signs of rebalancing, either through economic reopenings or additional forced or agreed upon supply cuts, should ultimately be viewed supportive for oil prices at current levels," said Stephen Innes, chief global markets strategist at AxiCorp.

Top producers have agreed to cut output by almost 10 million barrels a day to shore up markets, and the deal took effect Friday.

The agreement ended a price war between Saudi Arabia and Russia, which had added to pressure on markets even as demand evaporated amid the virus outbreak.