Market sentiment has since been bolstered by powerful central bank stimulus 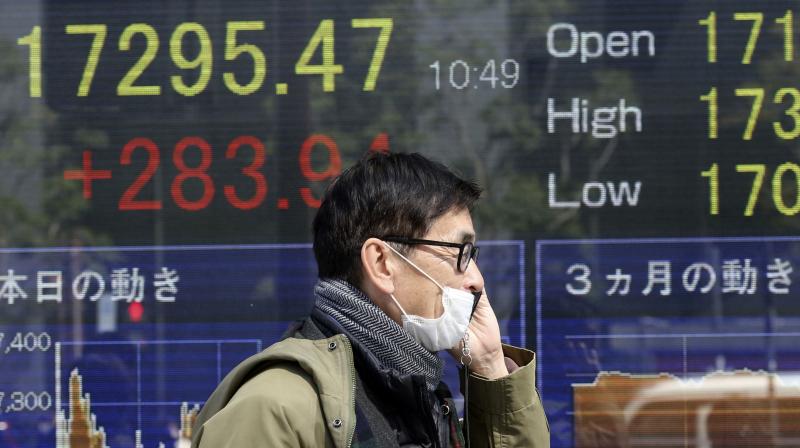 SYDNEY: Asian stocks were poised for their biggest weekly rise in over eight years while the euro hovered near a 1-1/2 month high as Europe’s central bank surprised with more stimulus, fuelling hopes for a global rebound.

The equities rally prompted investors to take winnings ahead of Friday’s nonfarm payrolls data, which is expected to show further deterioration in the U.S. jobs market.

As a result, MSCI’s broadest index of Asia-Pacific shares outside of Japan slipped 0.2% from a 12-week top with China’s blue-chip index off 0.2%.

The MSCI ex-Japan index is up about 6.5% so far this week. If gains are sustained it would be its best weekly showing since late 2011.

Emerging market equities have also boasted solid gains this week with Philippines the star performer, having risen about 1,000 points, or 11.6%, a sign money was moving into riskier assets.

“This market has gone up so far, so fast there’s a lot of people saying, ‘I’m going to take a little profit,’” said Jim Paulson, chief investment strategist at The Leuthold Group in Minneapolis.

Australia's benchmark index was down 0.3% but still near its highest since mid-March while Japan's Nikkei fell 0.36%.

Investors were a tad cautious at these heady levels with valuations at their highest since the dot.com boom in 2000, according to Matthew Sherwood, investment strategist for Perpetual.

Technical chart indicators suggest the market is at “over-bought” levels, Sherwood added, a signal that a correction is due.

World equity markets were thrashed in March when they hit “bear territory” on fears the COVID-19 driven lockdowns would push the global economy into a long and deep recession.

Market sentiment has since been bolstered by powerful central bank stimulus.

“Central banks have rightly stepped in to cushion the economic blow of COVID-19 and unquestionably succeeded in steadying the ship,” said Bob Michele, chief investment officer and head of the global fixed income, currency & commodities group at J.P.Morgan Asset Management.

However, Michele warned the massive scale of quantitative easing would distort pricing and mute traditional signals from bond markets on growth and inflation, advocating “co-investing” alongside central banks.

Investor attention is now focused on Friday’s U.S. employment report, which is expected to show nonfarm payrolls fell in May by 8 million jobs after a record 20.54 million plunge in April.

Currency markets show continued confidence in the expected revival of the global economy.

The euro was last at $1.1329 after hitting a 12-week high of $1.1361 on Thursday after the European Central Bank (ECB) increased the size of its bond purchases by a larger-than-expected 600 billion euros.

The common currency is up 2% this week, on track for its third consecutive weekly gain.

All eyes will next be on the U.S. Federal Reserve, which holds its regular two-day policy meeting next week.

The dollar index, which measures the greenback against a basket of major currencies, is poised for its third straight weekly loss.

The risk sensitive Australian dollar hovered near a five-month peak at $0.6941 and was on track for its third straight weekly rise.