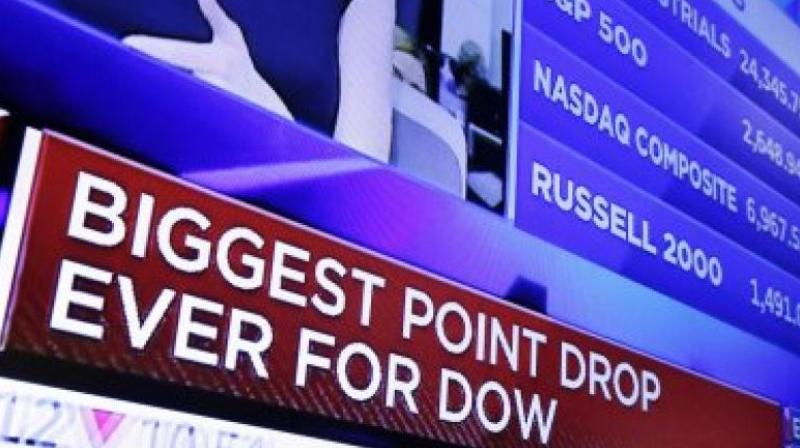 The declines for the benchmark S&P 500 index and the Dow Jones Industrial Average were the biggest single-day percentage drops since August 2011. (Photo: AP)

New York: US stocks plunged in highly volatile trading on Monday, with both the S&P 500 and Dow Industrials indices slumping more than 4.0 percent, as the Dow notched its biggest intra-day decline in history with a nearly 1,600-point drop and Wall Street erased its gains for the year.

The declines for the benchmark S&P 500 index and the Dow Jones Industrial Average were the biggest single-day percentage drops since August 2011, a period of stock-market volatility marked by the downgrade of the United States’ credit rating and the euro zone debt crisis.

The question now for investors, who have ridden a nearly nine-year bull run, is whether this is the long-awaited pullback that paves the way for stocks to again keep rising after finding some value, or the start of a decline that leads to a bear market.

"A lot of people who have been in this market for the past three or four years have never seen this before," said Dennis Dick, a proprietary trader at Bright Trading LLC in Las Vegas. "The psychology of the market changed today. It'll take a while to get that psychology back."

After regular trading hours on Monday, S&P 500 E-mini stock futures rose 0.73 per cent, suggesting some traders expect Wall Street to open with a gain on Tuesday.

Bulls argue that strong US corporate earnings, including a boost from the Trump administration’s tax cuts, will ultimately support market valuations. Bears, including short sellers that bet on the market decline, say that the market is over-stretched in the context of rising bond yields as central banks withdraw their easy money policies of recent years.

The US stock market has climbed to record peaks since President Donald Trump’s election, on the prospect of tax cuts, corporate deregulation and infrastructure spending, and it remains up 23.8 per cent since his victory. Trump has frequently taken credit for the rise of the stock market during his presidency, though the rally and economic recovery was well underway during the Obama administration.

As the stock market fell on Monday, the White House said the fundamentals of the US economy are strong. US economic growth was running at a 2.6 annualised rate in the fourth quarter last year and the unemployment rate is at a 17-year low of 4.1 per cent.

On Monday, the financial, healthcare and industrial sectors fell the most, but declines were spread broadly as all major 11 S&P sectors dropped at least 1.7 per cent. All 30 of the blue-chip Dow industrial components finished negative.

The market’s pullback comes amid concerns about rising bond yields and higher inflation which were reinforced by Friday’s January US jobs report that prompted worries the Federal Reserve will raise rates at a faster pace than expected this year.

"The market has had an incredible run," said Michael O’Rourke, chief market strategist At JonesTrading In Greenwich, Connecticut.

"We have an environment where interest rates are rising. We have a stronger economy so the Fed should continue to tighten ... You’re seeing real changes occur and different investments are adjusting to that," O‘Rourke said.

On Monday, the S&P 500 ended 7.8 per cent down from its record high on Jan. 26, with the Dow down 8.5 per cent over that time. The declines come after the Dow and S&P posted their biggest weekly percentage drops since January 2016 last week, and the Nasdaq posted its biggest weekly drop since February 2016.

At one point, the Dow fell 6.3 percent or 1,597 points, the biggest one-day points loss ever. Even with the sharp declines, stocks finished above their lows touched during the session.

"It doesn’t look like people are working their orders – the programs are trading this," Dan Ryan, who works on the New York Stock Exchange floor for E&J Securities, said as he was leaving work for the day.