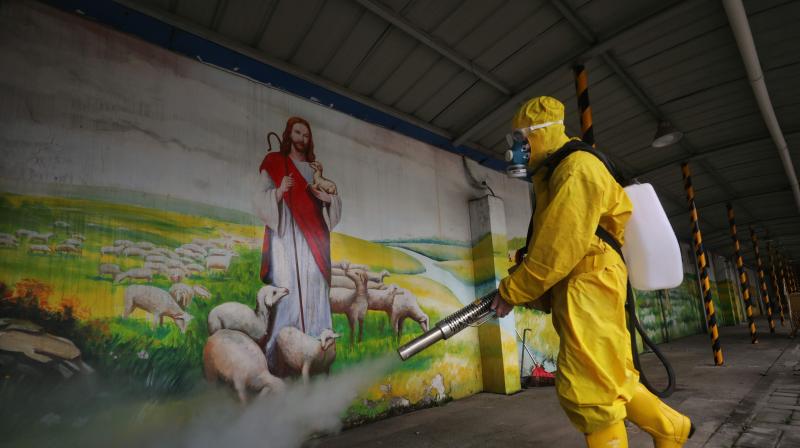 Hong Kong: Asian equities tumbled on Friday as analysts warned the volatility that has characterised markets during the the Covid-19 coronavirus crisis is likely to continue for some time.

While governments and central banks have unleashed or prepare to roll out stimulus measures, the rapid spread of the disease and rising death toll are putting a greater strain on economies and stoking concerns of a worldwide recession.

And with no end seemingly in sight -- almost 100,000 people in 85 countries have now been infected -- investors are fleeing out of risk assets such as stocks and into safe havens including the yen and gold.

All we know now is that we don't really understand what's going to happen next
- Michael Shaoul, head of Marketfield Asset Management

“It's probably four, six, eight weeks before we're going to have any useful information as to what the trajectory of the virus is and what the actual economic fallout looks like.”

The epidemic has wreaked havoc on international business, tourism, schools and sports events, and the World Health Organisation raised concerns about how the outbreak was being handled.

It said a “long list” of countries were not showing “the level of political commitment” needed to “match the level of the threat we all face”, with WHO chief Tedros Adhanom Ghebreyesus adding, “This epidemic is a threat for every country, rich and poor.”

Tokyo tanked more than three per cent in the morning session, while Hong Kong shed two per cent and Shanghai retreated more than one per cent.

Sydney, Seoul and Jakarta all lost more than two per cent, while Singapore, Wellington, Taipei and Manila were more than one per cent down.

Observers said the selling was also fired by investors protecting their portfolios ahead of the weekend in case of any more negative headlines, with warnings that monetary policy only had a limited effect as the virus continues to spread.

“Investors are starting to price in worst-case scenarios... and are now accelerating their hedging game plans for the eventuality of the eurozone falling into recession and the US economy stagnating in the first half of the year
- Stephen Innes, AxiCorp

With dealers flocking to safety and yields on US Treasuries at record lows, gold has rallied more than five per cent this week to sit at more than seven-year highs And the yen, the main go-to currency for traders in times of crisis, continued to rise against the dollar, with the Federal Reserve's shock rate cut this week adding to downward pressure on the greenback.

The dollar has lost more than five percent against the yen in two weeks and observers say the Japanese government could step in to prevent its unit strengthening further if the greenback drops below 105.50 yen.

Crude prices extended losses, a day after Brent fell below USD 50 for the first time since 2017.

News that OPEC ministers had recommended a huge production cut of 1.5 million barrels a day to offset the impact of the virus was unable to provide traders with any lift.

There are concerns over whether key producers outside the group — Russia in particular — will follow the advice.

Both main oil contracts have lost more than a fifth of their value so far in 2020.