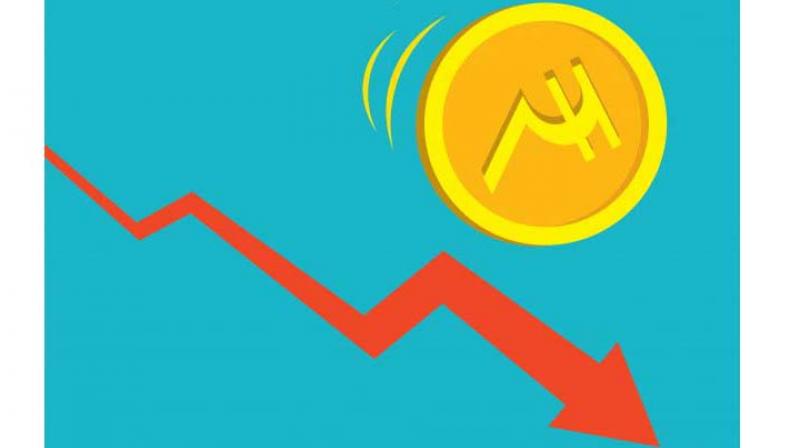 New Delhi: Investor wealth eroded by Rs 2.22 lakh crore on Thursday as markets recorded their biggest single-day fall this year after RBI delivered a rate cut on expected lines, but failed to assuage concerns regarding the NBFC sector. The 30-share BSE Sensex plummeted 553.82 points, or 1.38 per cent, to close at 39,529.72.

Tracking weak sentiment in the broader market, the market capitalisation (m-cap) of BSE-listed companies tumbled Rs 2,22,304.65 crore to Rs 1,53,19,126.66 crore. "Nifty had rallied in the recent days, leading up to the RBI policy. With a 25 basis points repo cut widely anticipated, indices corrected post the announcement. A possible reason of the fall could also be that there was no mention in the policy about addressing the liquidity stress in the NBFC space.

"With recent news around DHFL and the possible contagion effect, several financials corrected heavily today. However, I believe that market will soon take cognizance of the change in policy stance to accommodative," Amar Ambani, president and research head, YES Securities said. The broader NSE Nifty plunged 177.90 points, or 1.48 per cent, to end at 11,843.75.

Home, auto and other loans may cost less as the Reserve Bank on Thursday cut interest rates for the third time this year to their lowest level in nine years. The Reserve Bank of India (RBI) cut the repo rate by 25 basis points to 5.75 per cent and reverse repo rate by an equal proportion to 5.50 per cent and expected banks to transmit these to home, auto and other loan borrowers faster.

From the 30-share pack, 21 companies closed with losses, led by IndusInd Bank, Yes Bank, SBI, L&T, Tata Steel and M&M. All BSE sectoral indices ended in the red, with oil and gas, bankex, capital goods and finance falling up to 3.04 per cent.

In the broader market, the BSE mid-cap and small-cap indices ended up to 1.77 per cent lower. At the BSE, 1,859 scrips declined, while 740 advanced and 132 remained unchanged.