China returns to business tomorrow after extended break over Coronavirus 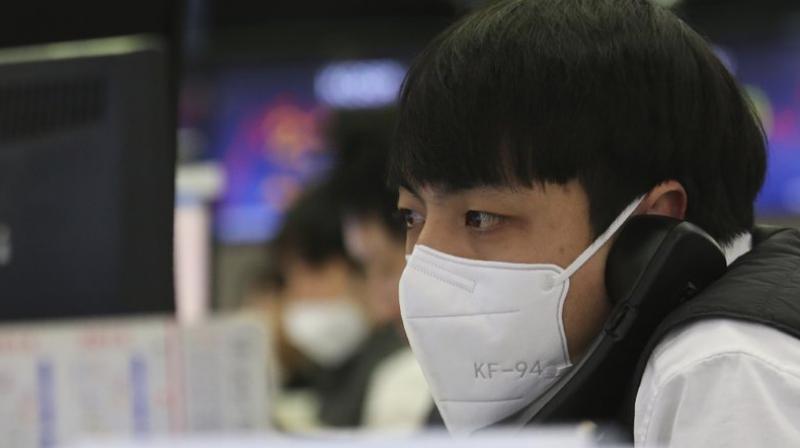 A currency trader talks on the phone at the foreign exchange trading room of the KEB Hana Bank headquarters in Seoul, South Korea. AP photo

The Chinese economy will sputter towards normal on Monday after the coronavirus outbreak forced an extended holiday, although numerous stores and factories will remain shut and many white collar employees will continue working from home.

The usually week-long Lunar New Year holiday was extended by 10 days in much of China amid mounting alarm over an epidemic that as on Sunday had killed 811 people.

Huge cities including Beijing and Shanghai seem like ghost towns, with shops and restaurants closed or empty, and as containment measures including transportation curbs are enforced in many parts of the country. Some cities are keeping schools closed and restrictions on movements remain.

Many employers in the southern technology hub of Shenzhen are taking precautions to prevent workers from returning in large crowds, asking those who have travelled from elsewhere to self-quarantine for up to 14 days.

Calls to the hotlines of an NGO serving migrant workers in nearby city of Guangzhou have multiplied in recent days.

“People are asking, ‘what if my factory hasn’t put enough safety measures in place? Will there be a notice suspending work again? How do I get in to work if roads are sealed off?’” said Ice Huang, a spokeswoman for the Inno Community Development Organisation.

Apple Inc said on Friday its retail stores in China would stay closed, even as it worked toward opening its corporate offices and contact centres.

Apple supplier Foxconn plans only to “gradually” restart its factories with a view to resuming full production in late February, a person with direct knowledge of the matter told Reuters.

While in Shanghai, the city government said Tesla’s factory would reopen on Monday.

The toll on China’s already-slowing economy has been heavy, with Goldman Sachs cutting its first quarter GDP target to 4% from 5.6% previously and saying an even deeper hit is possible.

“It’s certainly not going to be a return to normal next week,” said Julian Evans-Pritchard, senior China economist at Capital Economics in Singapore.

In Shenzhen, businesses looking to reopen were required to check the recent travel history of all staff and implement temperature checks and prevention measures such as providing masks. Similar guidelines were in place elsewhere.

Some businesses told Reuters that they were not sure when they would reopen.

“We’re still not sure we’ll be open on Monday,” Suki, who works in human resources for a Belgian-owned manufacturing company in Shenzhen and declined to give her surname.

“We applied online to open five days ago but inspectors only visited today,” she said on Friday.

Still, Sunday is set to be the peak travel day of the Lunar New Year period, an official from the Transport Ministry said this week, as millions of Chinese return from their holidays.

U.S. confectionary and pet food maker Mars said it was advising its China staff to continue working from home until at least Feb. 14 and providing masks, while apparel brand Agnes B said it had bought disinfectant to clean its offices.

Major tech companies such as Hangzhou-headquartered e-commerce giant Alibaba Group have told staff to continue working from home beyond Feb. 10 until further notice, people familiar with the matter told Reuters. Alibaba did not respond to a request for comment.

One engineer who works for a mobile phone manufacturer company in Shenzhen said she was told to return to work on Monday but was unsure whether to go. “It’s choosing between earning enough to live and living,” she said.