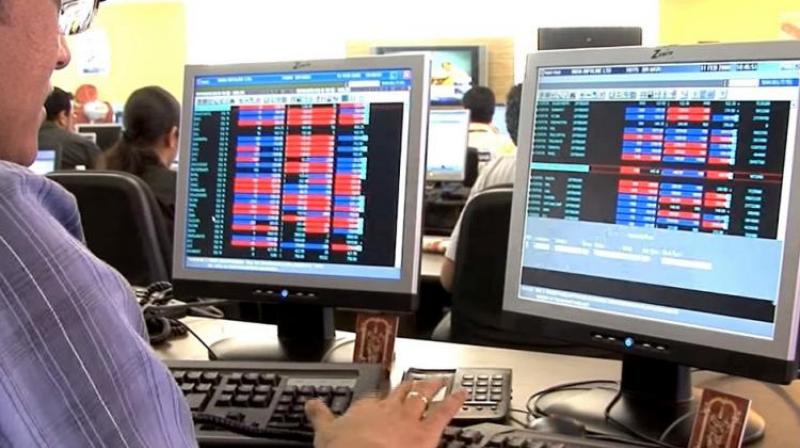 Mumbai: Disappointing macro estimates on Wednesday laid investors low as the Sensex and the Nifty squandered their early advantage and ran into losses ahead of the start of the earnings season.

The International Monetary Fund (IMF) on Tuesday lowered India's growth projection to 6.7 per cent in 2017, lower than its earlier estimate, unnerving investors, analysts said. The Nifty cracked and slipped below 10,000 as investors went around picking profit.

Caution remained the byword as June-September quarterly results kick off tomorrow, with TCS set to get off the block, and RIL the next on Friday.

Data on industrial production for August and consumer inflation for September is also lined up for tomorrow. The beginning was positive as the Sensex raced past the 32,000-mark shortly after the open as domestic investors pressed on with buying.

Short-term constraints will persist to haunt the market if the banking sector continues to underperform, he added. Tata Motors was in a cesspool of red as it was the biggest loser by 2.02 per cent. SBI, Dr Reddy's, Lupin and Tata Steel fell up to 1.97 per cent.

India's largest software exporter, TCS rose 1.66 per cent on optimistic buying by investors ahead of its second quarterly earnings while Reliance Industries ended 0.36 per cent down as participants scaled down positions before the company's earnings on Friday.

Bharti Airtel went up the most by 5.04 per cent after the company announced that it has partnered with Karbonn Mobiles to bring bundled 4G smartphone, a move aimed at taking on Reliance Jio during the festive season.

The BSE realty index took the maximum hit, falling 2.01 per cent, followed by metal, banking and healthcare. Small caps and mid caps dived by a wider margin than the benchmarks, down by up to 1.08 per cent.