Rupee climbs to 1 week high of 65.08 on dovish Fed minutes

At forex market home currency opened a tad higher at 65.13 from overnight close of 65.14. 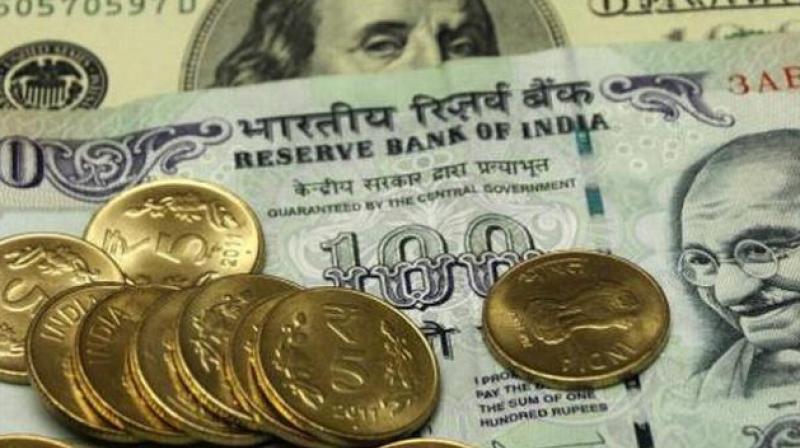 Mumbai: Exhibiting strength against the beleaguered dollar for the fourth straight day, the rupee appreciated by another 6 paise to end at a fresh one-week high of 65.08 on continued selling of the greenback.

The overall forex market sentiment got a much needed leg-up after the minutes from the Federal Reserve's last monetary policy meeting sounded dovish on rate rise outlook.

Consistent selling of dollars by some foreign banks and unwinding of short-term forward contracts by exporters mainly boosted the rupee trade.

A massive surge in local equities also helped the rupee rally to sustain.

However, the upmove was capped due to some caution ahead of the key economic data -- industrial production (IIP) for August and consumer inflation for September -- to be released later in the day.

At the Interbank Foreign Exchange (forex) market, the home currency opened a tad higher at 65.13 from overnight close of 65.14.

The Indian unit has strengthened by a whopping 30 paise with a four-day rally.

In the meantime, domestic equities staged a stellar rebound on the back of across-the-board buying spree as investors considered the latest set of US Federal Reserve policy minutes amid bullish global cues after a record close on Wall Street.

Globally, the dollar fell to two-week lows against other major currencies amid fresh uncertainty over a potential US rate hike before the end of the year and as investors eyed a batch of US economic reports due later in the day.

The dollar index, which measures the greenback's value against a basket of six major currencies, was trading higher at 92.98 in early trade.

In cross-currency trades, the rupee hardened against the pound sterling to finish at 85.54 from 85.91 per pound and also advanced against the Japanese yen to settle at 57.97 per 100 yens from 58.02 earlier.

The local currency, however, drifted further against the euro to end at 77.17 from 77.03 on Wednesday.

In forward market on Thursday, the premium for dollar remained under immense pressure owing to sustained receiving from exporters.

On the international energy front, crude prices eased marginally impacted by a surprise increase in US inventory despite efforts by OPEC to cut production, though the overall sentiment remained buoyant on the back of demand outlook.

US West Texas Intermediate (WTI) crude futures were trading at USD 51.08 per barrel in early Asian trade, down 22 cents, or 0.4 per cent, from their last settlement.

Brent crude futures, the international benchmark for oil prices, were at USD 56.65, down 29 cents, or 0.5 per cent, from the previous close.