Price of onions slashed by at least 20 per cent 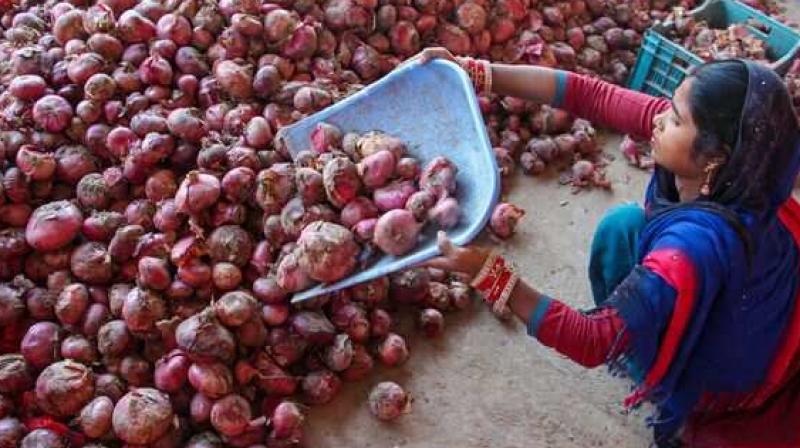 The Central government on Monday banned the export of all varieties of onions with immediate effect to increase availability and curb prices of the commodity in the domestic market. (PTI)

Mumbai: A day after the Central government’s ban on the export of onions, the prices have been slashed by Rs 800-900 per quintal at Lasalgaon Agricultural produce market committee (APMC) in Nashik district.

The ban on the export of onions has also affected their procurement in APMCs. Amid this, former chief minister and Bharatiya Janata Party (BJP) leader Devendra Fadnavis on Wednesday requested the Union minister of commerce & industry Piyush Goyal to lift the ban as the decision has disappointed farmers. Meanwhile, the Maharashtra Congress unit on Wednesday staged a statewide agitation against Prime Minister Narendra Modi.

In a letter to Goyal, the former chief minister said, “The ban on the export of onions of Maharashtra should be lifted immediately as they have huge demand overseas. As a result, the state farmers get a good price for the same. The ban has affected the onion growing farmers. I hope that you will immediately take appropriate decisions.”

State Congress president and revenue minister Balasaheb Thorat said that onion prices have collapsed due to the ban on export, and asserted that his party will fight against this “injustice” meted out to farmers. “Farmers in the state are tackling problems arising out of cyclones and floods, and the state government is doing all it can to help them. But, the Centre is not cooperating,” he said.

Thorat also criticised the Centre’s decision and said onion prices have collapsed by Rs 700 to Rs 800 per tonne due to the ban on export. “Now, when there is scope for farmers to earn some money due to onion export, the central government has stopped it. We will fight this injustice against farmers,” he said.

The Central government on Monday banned the export of all varieties of onions with immediate effect to increase availability and curb prices of the commodity in the domestic market.

The farmers on Tuesday had staged a protest against the Central government for not allowing the APMC markets to operate. Director of APMC Lasalgaon, Jaydatta Holkar said that the procurement of onions has been reduced by 50 per cent on Wednesday. Besides, the price has also been reduced to Rs 2,200 to Rs 2,300 from Rs 3,000 per quintal.