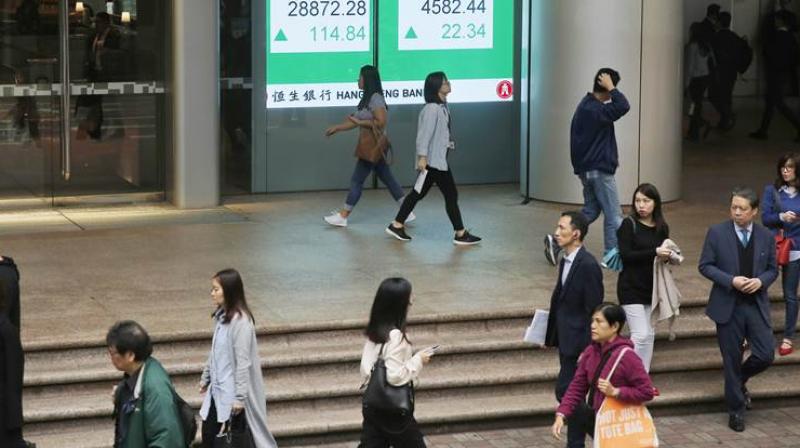 People walk past an electronic board showing Hong Kong share index outside a bank in Hong Kong. (AP Photo)

HONG KONG: Markets slipped Thursday as investors took a breather after a broad two-day rally, while concerns about a new wave of virus infections continued to play off against massive monetary easing and stimulus measures.

The financial support, along with the easing of lockdown restrictions, opening-up of economies and positive data have provided support to equities across the planet in recent months.

But there is growing sense that traders may have got ahead of themselves and observers warn markets could be in line for a pull-back unless there is a major event to move higher, such as the development of a vaccine.

Tokyo and Hong Kong were down one percent, while Sydney lost 1.6 percent after data showed a massive jump in Australian job losses.

Wellington was also down more than one percent after news the New Zealand economy suffered its worst contraction for almost three decades in the first quarter.

"The market is searching for a new catalyst," said Sameer Samana, senior global market strategist at Wells Fargo Investment Institute. "The narrative around policy stimulus and better economic data seems to be losing its sway."

Analysts suggested there may also be some trepidation on trading floors about possible Democratic victories in November's US presidential and congressional elections, with Donald Trump's rival Joe Biden considered less likely to push such things as deregulation and tax cuts.