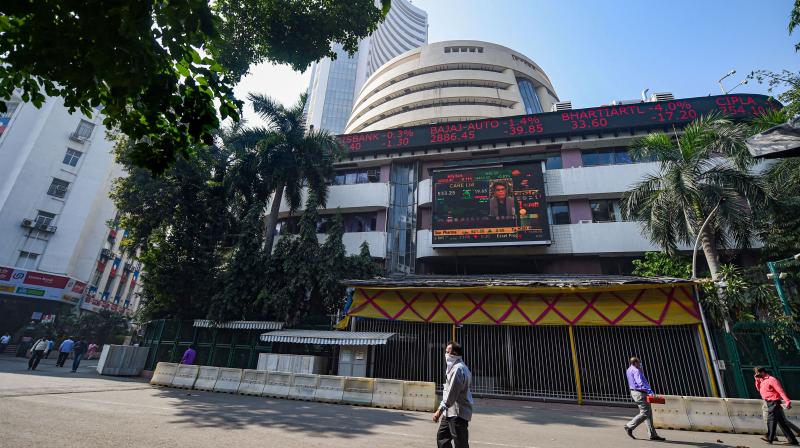 Mumbai: Equity benchmark Sensex rallied over 300 points to hit the 50,000-mark for the first time ever in early trade on Thursday on strong gains in index majors Reliance Industries, Bajaj Finance and ICICI Bank amid positive global cues.

Bajaj Fiserv was the top gainer in the Sensex pack, rising around 4 per cent, followed by Bajaj Finance, Reliance Industries, IndusInd Bank and Axis Bank.

On the other hand, TCS and HDFC twins were the laggards.

Foreign portfolio investors (FPIs) were net buyers in the capital market as they purchased shares worth Rs 2,289.05 crore on Wednesday, as per exchange data.

According to Binod Modi Head-Strategy at Reliance Securities, domestic equities look to be good at the moment given positive global cues.

"We believe underlying strength of the market remains intact given continued recovery in key economic data and expectations of sustained recovery in corporate earnings. Further, ongoing vaccination drive and likely opening-up of economy at full scale augur well for the economy and equities. Additionally, favourable monetary policies of global central bankers, weak dollar and large fiscal stimulus in the US are expected to ensure sustain FPIs flow in domestic equities," he said.

US equities finished at record highs on Wednesday after Joe Biden was sworn in as the President of the United States and he vowed to take all necessary measures to bring back the US economy on track.

Elsewhere in Asia, bourses in Shanghai, Hong Kong, Seoul and Tokyo were trading with significant gains in mid-session deals.

Meanwhile, the global oil benchmark Brent crude was trading 0.30 per cent higher at USD 55.91 per barrel.