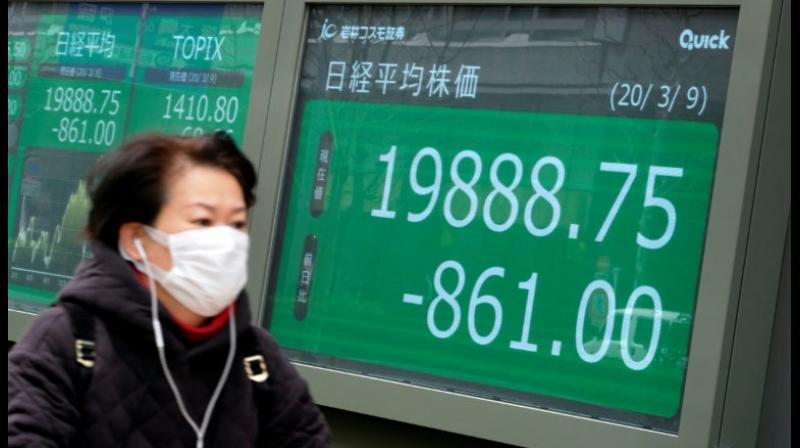 Hong Kong: Asian markets were hammered on Monday despite massive economic stimulus efforts worldwide, with investors spooked by the relentless march of the coronavirus pandemic.

The negative mood was fuelled by the failure of US lawmakers to agree on a trillion-dollar emergency package to help the reeling American economy.

The global death toll from the virus has surged past 14,700, with nearly a billion people confined and non-essential businesses shut in dozens of countries and growing fears about a recession.

Wellington nosedived 7.6 percent as New Zealand announced a four-week lockdown to stop the spread of the coronavirus.

The Hang Seng Index in Hong Kong was down 4.4 percent, Sydney dropped 5.6 percent, Shanghai shed 2.3 percent and Taiwan was off by 3.7 percent.

Tokyo was the exception, closing two percent higher as a cheaper yen against the dollar boosted Japanese markets.

Nikkei heayweight SoftBank Group said it would sell up to $41 billion in assets to finance a stock buyback, reduce debt and increase its cash reserves, boosting its share price by more than 18 percent in the last hour of trade.

Airlines have been hit particularly hard, with isolation measures shutting down routes and grounding fleets worldwide.

Singapore Airlines, meanwhile, said it would ground most of its fleet until the end of April. The carrier said it was facing the greatest challenge in its existence.