Petrol prices on Sunday remained unchanged. Prices of petrol have remained static at Rs 80.43 per litre for almost four weeks 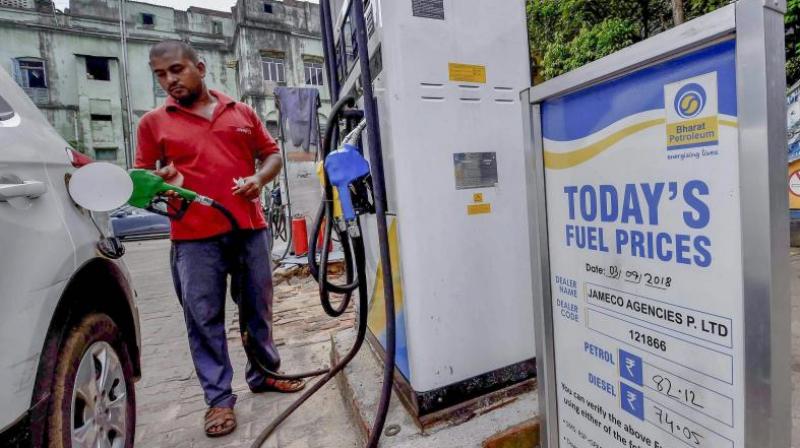 New Delhi: Diesel price in the national capital on Sunday inched towards the Rs 82 per litre-mark following the second consecutive day of price hike.

Diesel price was increased by 15 paise per litre, according to a price notification of state-owned oil marketing companies.

This took the retail selling price in the national capital to the highest ever rate of Rs 81.94 per litre.

Rates vary from state to state depending on the incidence of local sales tax or VAT.

Prior to hitting the freeze button, petrol price had been increased on 21 occasions since the oil companies reverted to daily price revision on June 7.

The cumulative increase in petrol came to Rs 9.17 per litre.

Diesel rates have continued to be revised sporadically in July. The cumulative increase in diesel price since June 7 now totals Rs 12.55 per litre.

Prior to June 7, oil companies had for 82 days not revised petrol and diesel prices as they adjusted a record increase in excise duty by the government against the fall in rates warranted due to international oil prices slumping to a two-year low.

Commenting on oil prices, ICICI Securities said sharp recovery in oil price from lows in April was driven by fall in global supply surplus from 22.7 million barrels per day (bpd) to demand-supply balance in June.

"Global oil supply in June fell by 13.7 million bpd from April levels, while demand recovered by 9.1 million bpd during the same period as per IEA. Falling supply and recovery in demand led to demand-supply balance in June vs supply surplus of 22.7 million bpd in April," it said.

It said lockdowns due to the second wave of infections have hurt demand recovery in the US and India.

As per EIA data, total US, gasoline and diesel demand decline was steeper in the week ended July 17 than in the preceding 4-6 weeks.