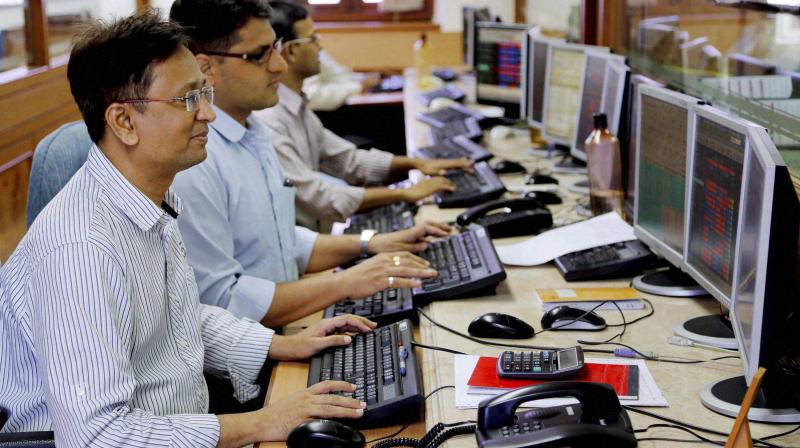 The Nifty bank index soared by nearly 10 per cent in the past week. (AP file photo).

Mumbai: It was a good week for India's stock markets with banks and other financials helping the Sensex and Nifty-50 to regain pre Covid-19 levels.

BSE’s market capitalization stood above Rs 1.58 lakh crore compared to March 2020 low of over 1.13 lakh crore, indicating that investors have regained around Rs 45 lakh crore in the sharp recovery so far.

The Nifty Bank index gained a hefty 9.97 per cent of which 4.19 per cent gain came on the last day of the week.

The Nifty closed the week higher by 2.43 per cent up for the second consecutive week. Markets ended higher on all 5 trading days.

The broader markets mildly outperformed the benchmark indices. The NSE Midcap and Small-cap indices gained by 2.6 per cent and 3.7 per cent respectively.

The key indices held up above the mark buoyed by expectations from the twin verdicts next week which would have an impact on banking stocks, analysts said.

The Supreme Court during the week heard a plea seeking interest waiver for six months during the loan moratorium period granted by the Reserve Bank of India. The apex court adjourned the hearing to September 1 while giving government one week's time to clarify its position.

The court may also pronounce its order reserved in the matter of adjusted gross revenue dues of telecom companies next week.

Vikas Jain, senior research analyst, Reliance Securities, said, "The positive news flow from the domestic and global markets set the ball rolling for banking stocks. The US Federal Reserve’s new policy stance of let inflation run higher and unemployment run lower, meaning prolonged low interest rates, is one of the reasons which created a positive sentiment on banking stocks. Also there are a lot of private banks which have raised money through the QIP route for lending over the past few weeks.”