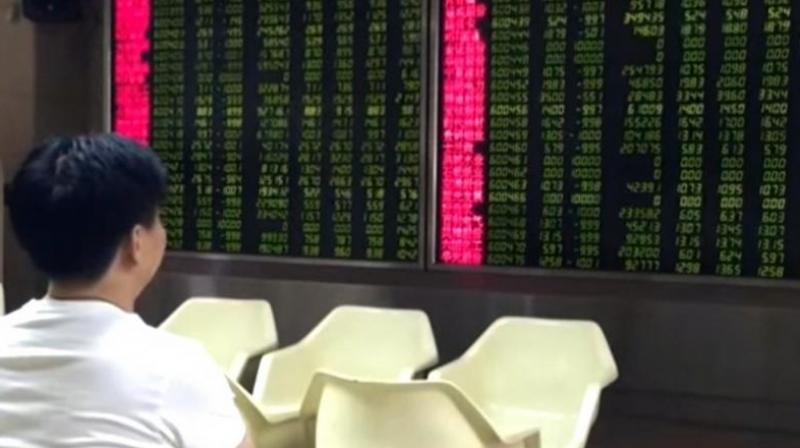 China’s yuan, which had steadied on Wednesday, was again falling - dropping 0.2 per cent to 6.9871 per dollar.

Singapore: Asian stocks and currencies fell on Thursday as the death toll from a new virus spreading in China rose and more cases were reported around the world.

Federal Reserve Chairman Jerome Powell acknowledged on Wednesday the risks from any slowdown in the world’s second-largest economy but said it was too early to say what the extent of the impact would be on the United States.

MSCI’s broadest index of Asia-Pacific shares outside Japan .MIAPJ0000PUS fell 1.7 per cent to an almost seven-week low. It has dropped for six straight sessions.

Japan's Nikkei dropped 2 per cent. Hong Kong's Hang Seng fell 1.7 per cent and has lost more than 8 per cent in the 10 days since the spread of the virus roiled markets.

Taiwan's benchmark index slumped 4.9 per cent, which if sustained would be its biggest daily drop in 15 months, in its first session since the Lunar New Year break. The Taiwan dollar fell half a percentage point to its lowest this year.

Yields on benchmark 10-year US Treasuries, which fall when prices rise, hit a three-month low of 1.5600 per cent.

China’s National Health Commission said on Thursday the total number of confirmed deaths from the coronavirus in the country climbed to 170 as of late Wednesday and the number of infected patients rose to 7,711.

Infections have been reported in at least 15 other countries and in every province of mainland China. Sweden’s IKEA said on Thursday that it has temporarily closed all its stores in China because of the outbreak of the new coronavirus.

“In a matter of days, the coronavirus has shuffled the cards, and Fed policy is not sitting quite as comfortably,” said Alan Ruskin, Chief International Strategist at Deutsche Bank.

“The Fed, like everybody else, is going to have a tough time quantifying the scale of the potentially large shock emanating out of China.”

Most analysts have looked to the impact from the 2002-2003 spread of Severe Acute Respiratory Syndrome (SARS), which pounded tourism and confidence, albeit briefly.

J.P. Morgan economists on Thursday said a big negative shock in the current quarter could knock China’s growth from a previously-forecast 6.3 per cent to 4.9 per cent, for a year-on-year figure of 5.6 per cent. ING economists made a similar forecast on Wednesday.

“The SARS episode in 2003 suggests that the shock could lead to a large impact on economic activity, especially as the fear factor could restrict people’s mobility,” J.P. Morgan analysts wrote.

“The spillover effect from China to the rest of world tends to be much larger than the SARS episode,” they added, pointing out China’s share of the world economy has more than trebled since then.

The World Health Organisation’s Emergency Committee is due to reconvene on Thursday to decide whether the rapid spread of the virus now constitutes a global emergency.

Oil prices, a barometer of the expected impact of the virus on the world’s economy, resumed their slide. US crude and Brent crude each shed a percentage point, with Brent last trading at USD 59.21 per barrel.

China’s yuan, which had steadied on Wednesday, was again falling - dropping 0.2 per cent to 6.9871 per dollar along with other trade-exposed currencies in the region.

The Australian dollar, New Zealand dollar, Korean won all fell, while the safe havens of the Japanese yen and Swiss franc were firm.

And the mood extended the rally in US government bonds which began after Fed Chairman Powell indicated inflation was too low.

The central bank “is not satisfied with inflation running below 2 per cent and it is not a ceiling,” Powell said. With the Fed’s targeted core inflation running at 1.6 per cent, the remark was interpreted as scene-setting for a rate cut, with markets now pricing in a 10 per cent chance it could come in March.