Runversation: Will to fight makes triathlon a cakewalk 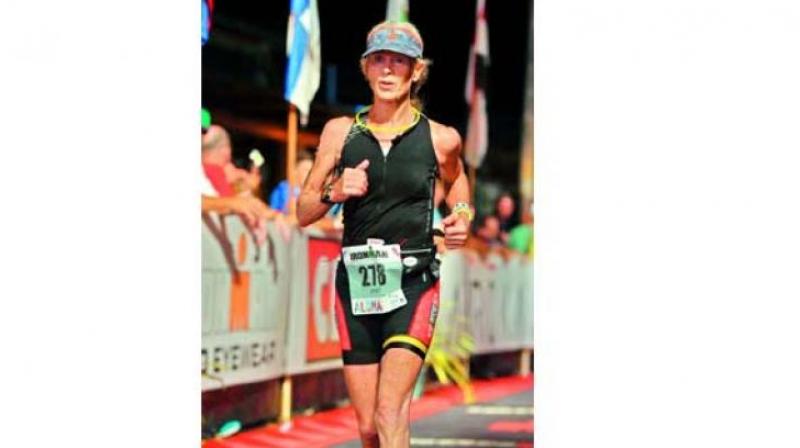 Each living being has within the means for survival. Some can swim, others can fly, some are very fleet, others are very big. Some have very tough skins, others can blend in with their surroundings. Human beings have none of these features, and yet they can adopt them all. Human beings have a fierce instinct for survival. The will to live is a force within all of us to fight for survival when our lives are threatened by a disease or a situation which can snatch away our lives. Yet this force is stronger in some people than in others.

At the age of 32, Mary Houbolt, a software engineer, found a lump in her breast. Tests revealed it was malignant and the cancer had spread to her lymph nodes. Her chances of survival were negligible. Hearing that diagnosis, she remembers, was “life-shattering”. Mary says, “It wasn’t just fear about losing my own life but leaving the lives of my children and husband in the lurch.”

Mary underwent an aggressive treatment and the cancer went into full remission. When she turned 60, she wanted to celebrate surviving cancer by doing something monumental. She decided to participate in an Ironman Triathlon. “During my training, I always reminded myself how fortunate I was to still be around to try doing something gruelling as a triathlon. I was alive, so why not try. I’m a mediocre runner and hadn’t done any swimming except for lessons as a child, was hooked on to biking outside,” says Mary enjoying the seven-day-a-week commitment to exercise. After 14 months of training, Mary was at the standing line competing in her first Ironman.  Mary’s intention was simply to finish. Instead, she ended up winning in her age group.

Life itself isn’t sensible. No one can say with ultimate authority what will happen with cancer, with a job that appears shaky, with all reversed fortunes so you may as well seize all glimmers that appear. Be bold, be venturesome, and be willing to experience each day to the fullest to enhance your enjoyment of life. Have hope, there’s no such thing as false hope: all hope is valid, even when hope would no longer appear to be sensible.

One triathlon is enough for most people. Mary had a different take. “I thought, ‘Maybe I’ll keep trying. I get so much personal satisfaction from competing against myself,” she says.

In the past seven years, Mary has competed in nine Ironman competitions and more than 20 other triathlons. She’s also raced across the country as part of a four-woman team for Race Across America (RAAM), one of the most respected and longest-running ultra-endurance bicycling events in the world where racers must cycle 3,000 miles (4,828.032 km) across 12 states traversing roughly 170,000 vertical feet.

Mary is now 67 years old and doesn’t want to slow down anytime soon. “I don’t want to just sit on the couch. I feel lucky to be alive. I think Life is great. I’m really glad I was able to keep mine,” she says.

Of all the ingredients in the will to live, hope is the most vital. Hope is the emotional and mental state that motivates you to keep on living, to accomplish things, and to succeed. Hope is what people must have to live on. Take away hope, and you take away a chance for the future. Each of us has the capacity to live each day a little better, but we need to focus on both purpose and goals and set into action a realistic daily plan often altered many times to help us achieve them.