Copper gets a new shine and market

With steel and plastic easy to use, the coppersmiths of Pune were pushed into obscurity. 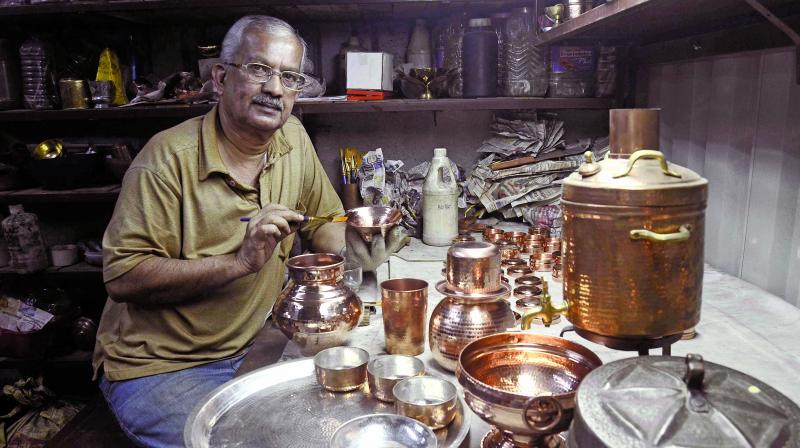 Arts and crafts cannot flourish unless patronised by the markets or, as it was in the early days, by royalty. And with both these elements being absent, it was only natural that the coppersmiths of Pune found themselves relegated to doing job work for utensil sellers.

About 400 years ago, this community flourished. Shivaji used cannons made by them and the Peshwas, the ruling dynasty in the region, had their naanis (coins), khillas (letter forms for printing) and armour made by them.

With the advent of British rule, the coppersmiths of Pune were pushed into obscurity. Says Kishore Karde, a coppersmith and resident of Pune’s famous Tambat Ali: “The British did not trust us with making their arms and started producing it themselves. As a result, the community suffered.” Technology, too, played its role. With steel and plastic becoming more easy to use, people stopped using copper items.

Till Intach (Indian National Trust For Art and Culture) intervened about 15 years ago. Says Arti Kirloskar who was the Intach convener at the time, “One of our jobs was to list the tangible and intangible heritage of the city. We saw that the kumbhars (potters) were fragmented, so were the stone workers. But the coppermsiths lived in this area in Kasba Peth known as Tambat Ali. This community was doing some work making utensils. So we thought it was important to get it registered as a local craft.”

Rashmi Ranade, an architect and director of Coppre Studio said that states like Gujarat and Rajasthan and even some in the North-East and South have a rich heritage of local arts and crafts, “I think because Maharashtra was an early mover in industrialisation we lost a major part of our heritage”.

To classify as a craft, Ms Ranade says, it should be something “you make with your hands, it should be intrinsic, passed down from generations, not learnt from the outside, you should see your family members do it. This craft had all these elements. So we took this initiative and got it registered as a craft with the District Industries Commission, Pune.”

Getting it registered meant that the artisans could be showcased, could benefit from workshops the government organised for them.

Intach began by creating awareness about this craft. “We organised heritage walks to Tambat Ali and people came to know of this craft,” says Ms Kirloskar. But creating awareness was not enough. The karigars needed to go beyond doing job work for utensil stores. The artist within them needed more avenues to flourish.

So in 2011, Ms Ranade with seed funding from the industrial house of Forbes Marshall set up Studio Coppre, an organisation that would help the coppersmiths create items that had a greater demand in the market.

Copper is a high maintenance metal. And its use in the kitchen had dropped. To create a market, the product typology had to be changed — from functional items to decorative ones. “From making utensils and temple finials, we started making tea light floaters and such like,” said Mr Ranade. Getting these artisans to change was not easy. “They were making about `200 a day on orders given by stores and here we were telling them that you could up that four or five times if you made different things. It was a leap of faith for them to believe what we were saying. Initially, about 15 artisans agreed to make different items. Today we have about 50 karigars with us in Pune and about 150 across India. “Making contemporary products required not just design but also training. Studio Coppre started organising training workshops to show how different products were made. “Every item we make needs training of our karigars. We have to make prototypes, make them conscious about quality, design detailing, show how tools are made, how to save material and so on,” Ms Ranade explains.

In fact, seeing the success of Studio Coppre, more  entrepreneurs are now flocking to Tambat Ali with their designs. But what is most important is that a dying art form has got a second lease of life and is flourishing.