Art beat: Living on the canvas

The internet has liberated the art business a bit from the earlier stranglehold of a few, but it has still far, far to go. 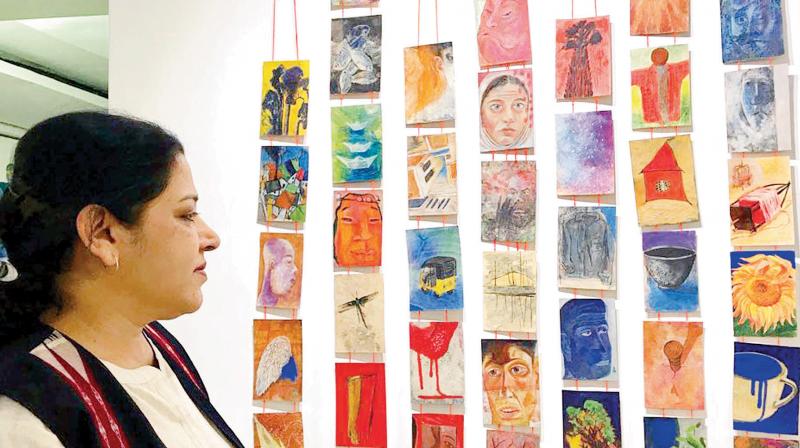 Art consumers — be they be buyers, investors or audiences — seldom realise that entire lives are dedicated to the creation of arts, both visual and performing, and that not being able to make a living out of it is heartbreaking.

Glamorous it is to be an artist or artiste but sustaining and creating glamour needs a basic ingredient — moolah or money. However romantic be the notion of starving artist in garret, the fact is that bhukhe pet na hota bhajan Gopala — which loosely translated means that it is not possible to even sing the God’s name on an empty stomach.

Art consumers — be they be buyers, investors or audiences — seldom realise that entire lives are dedicated to the creation of arts, both visual and performing, and that not being able to make a living out of it is heartbreaking.

I hate the thought of artists suffering in trying to make ends meet, as living off the arts, across the board, is almost next to impossible.

While the creation of the art liberates you, the economic unviability of it is positively infuriating.

The internet has liberated the art business a bit from the earlier stranglehold of a few, but it has still far, far to go. The reasons are not far to seek. Given the touchy-feely nature of art, few are willing to spend huge amounts of money in acquiring a painting or sculpture at the click of a button. Prints and serigraphs do better online than actual paintings for the same reason. But what the net has done is to liberate the artist from the stranglehold of the gallery system and made him or her at least available and accessible to possible consumers.

But, then, the art business is unlike any other. It is complicated. To begin with, it has three categories or clusters — buyers, investors and collectors. Largely it is reliant on the social network of people trying to sell the art. It is like trying to find that one person in a sea of humanity who will like that one particular work and can afford to pay for it and not mind if it doesn’t resell. The bottom line of the entire art business is nothing but this. This means that unless you are part of the elite don’t even try getting into it.

No managers you will hire for selling can do it for you. That is the reason why most gallerists are perennially looking for people to sell the works to and feeling unhappy with their sales staff. The arbitrary pricing of artworks and the willingness of artists and gallerists to undercut makes the business even more unprofessional. The major reason for this is that gallerists have been unable to project and position Indian arts on the global platform with any kind of seriousness. Here, Indian art criticism as a whole has to also share the blame. The indifferent level of writing and the unwillingness of newspapers to devote enough space to art have led to this peculiar situation where Indian art was ready to be catapulted into the global arena, but there was no support base and intellectual backing to take it to the next level.

Finding the space empty, “investors” — who were exactly that — stepped in. It was not their mandate to support art but only to invest, make a killing, and exit.

Here stepped in the neo gallerists who fuelled this breed’s greed by tall claims and did the greatest damage by tempting more investors into investing, pretending that these were blue chip portfolios and could be liquidated as and when. The fact is that art is not a short term investment. That it pays is a given, but it is a long-term investment.

These neo-galleries invariably run by bored and rich housewives who had little understanding of the art business, let alone supporting artists, created havoc by creating a caste system where a handful of artists became the “Brahmins and Kshatriyas” and all the others were the Dalits. Unapproachable and difficult, they played one against the other and in the end, all had become pariahs. Now, many of these neo galleries have abandoned the ships they were sailing in. So much so that even senior artists are opting to hold shows on their own. After all, why should they play subservient roles when they are paying for the catalogue, media relations, framing, paints and canvas, and to top it all, pay a percentage from the earning?

Ever since I started writing about art nearly 35 years ago, I have been hearing some truly remarkable stories of gallerists who served the cause of both art and artists by supporting artists through creative or sometimes non-creative phases when they needed financial and emotional sustenance. Old-timers will recall the great role played by Ravi Jain of Dhoomimal, Kekoo Gandhy of Chemould, Dadiba Pundole of Pundole, Navroz Daruwalla of Crimson, in being great supporters of artists for they loved art and were willing to go the extra mile. They would hold shows for newcomers, give advances to tide over bad patches and generally be huge pillars of strength.

The only way out of the current imbroglio is perhaps to put a public-private partnership in place where audiences are able to create from within themselves viable support systems to preserve our heritage and the creators of it. The film and television “industry” created its checks and balances and, of course, union groups etc., to negotiate better wages and working conditions, but the arts are so niche and individualistic that such a thing will not work.

Where does it bring us back to — mostly square one? I truly hope not.

(Dr Alka Raghuvanshi is an art writer, curator and artist and can be contacted on alkaraghuvanshi@yahoo.com)