Gender bender: The Priestesses of Pune

A conservative society found this break in tradition shocking. The women were told that bad luck will befall their families. 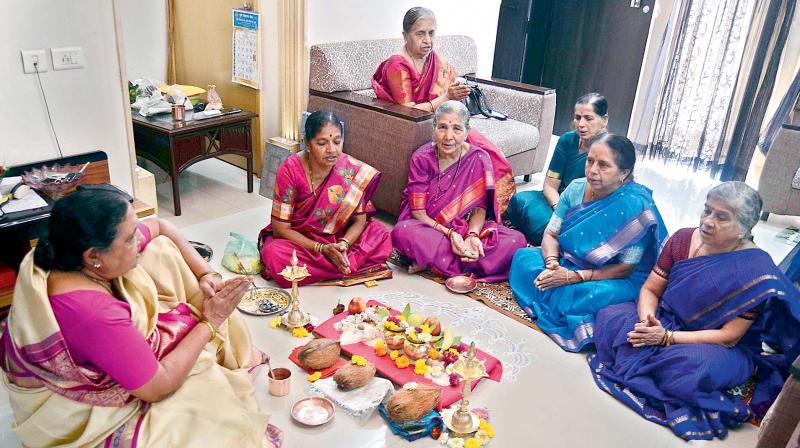 A priestesses performing puja at one of the houses. (Photo: Ravi Joshi)

A mahila ashram in Shirdi began teaching widows and destitutes how to perform Hindu pujas in the 1970s. The students continue the classes in their own homes.

Their chanting reinforced the tradition. Reinforced unfairness. Made women children of a lesser God. Religious ceremonies were the preserve of male Brahmin priests, until, in 1974, Shankarrao Thatte aka Mama Thatte, owner of Udyan Mangal Karyalaay, a wedding hall in Pune, changed all that when he trained women priests to officiate at religious ceremonies.

Mangala Marathe was a student in the first batch in 1974 and is a teacher herself now. “In those days,” she recalls, “there was a shortage of pundits to do pujas. Mama owned a wedding hall and used to provide couples with priests, but this shortage was a big problem for him. So he decided to do something about it.”

A mahila ashram called Sakori in Shirdi seemed to be the answer. It had taught its residents who were either widowed or destitute, how to perform Hindu pujas. Mama went there and asked if they would send these ladies to Pune to do the pujas. The ashram authorities refused as women were not allowed to go outside the ashram premises.

Mama went back to Pune and started learning the stotras from the local gurujis. “As he was Brahmin and male, the gurujis readily taught him. But Mama had plans. He felt that the shortage had to be tackled. So he put out an ad in the local paper offering to teach women to become priestesses. Twenty-five women enrolled. And thus began this movement against male bigotry,” says Mangala.

She says that in four months the women learnt five stotras by heart. “Mama was very, very strict about the way we pronounced each word, the intonation, the pauses. He didn’t care what caste or community we belonged to, but we had to say the stotras right.”

A conservative society found this break in tradition shocking. “We were told we would become widows, bad luck will befall our families. But we did not bother. Mama told us that what has to happen will happen whether or not you do the pujas. Do not listen to these men. They do not want you to take over their business,” Mangala says.

Mama got more ambitious with time. He learnt what is considered difficult by priesthood standards, pujas like the Purush Sukt (the 16 mantras of Lord Vishnu), the Rudra Sukt (which sings the praises of Lord Shiva and then asks for favours), and others that required the ladies to get the sur and the sukt right. These are the high and low intonations to be used at the right time when reciting the prayer. Never before had women been allowed to conduct these pujas.

Friends and family were the first to rally around. Says Mangala, “When my family members saw me do the pujas at home, they would call me for a Satyanarayan puja at their home, then their friends would call us to do pujas in their homes.”

Initially Mama would send two women together to do the pujas to ensure their safety. But as word spread and more people began to invite the priestesses to do pujas in their homes, the acceptance levels rose and the women priests became popular in Pune. Jnana Prabodini, a premier educational institute in Pune, started offering such courses to women.

More and more women enrolled for such classes.

Mama Thatte died in 1987, but his classes continued for some time. Then slowly his students started moving away from the Karyala and started classes in their own homes. Mangala Marathe has classes thrice a week in her home.

Shubhangi Bhalerao teaches the shlokas to Gujaratis and Marwaris, or anyone who wants to learn. “I don’t ask about the caste just as Mama didn’t. Even if a Dalit came I would happily teach her. But so far no one has come forward to learn.”

Jnana Prabodini has a more formal set up.

Says Chitra Chandrachud, a panelled member, “We teach women all types of pujas, right from the naming ceremony to the death rituals. We believe that nothing is inauspicious and women have a right to do all the pujas.”

One can book a priestess at Jnana for a nominal fee — Rs 500 for a naming ceremony and `1,000 for a shraddh. Shubhangi says doing a puja is a privilege so she charges very little to teach others.

“I charge my students as little as Rs 50 per class and for doing varied pujas our main aim is to cover our travelling expenses. We take whatever people pay us. Some give us Rs 250 for a Satyanarayan puja and we are happy."

Perhaps the fact that they can do what was considered a male Brahmin’s job is so empowering that the dakshina is inconsequential.