Building blocks: Designer babies could be a new recipe for life 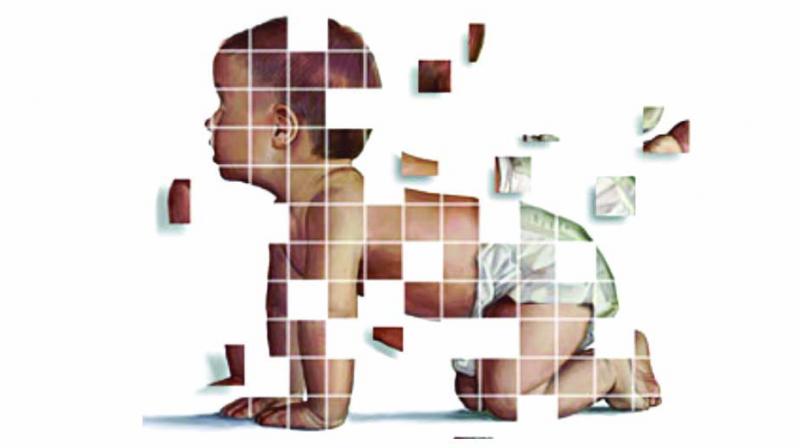 IVG will redefine the family system. Furthermore, if gene editing is added, it would make it easy to repair, add, or remove genes during the IVG process.

People’s obsession with designers is ingrained especially as fashion keeps undergoing tectonic shifts. Designer outfits are not just for adults, but for kids too. Parents are spending money on beauty accessories for their very young offspring. So it’s not surprising that designer babies may be a reality in a decade or two, as human reproduction is at the brink of another revolution.

Louise Joy Brown was conceived in a petri-dish and became the first human created using in vitro fertilisation (IVF) in 1978. Harsha Chawda was India’s first test-tube baby born in 1986. IVF, which gives infertile couples a chance to procreate, had many critics when it was first used. In the decades that followed, millions of healthy and normal babies were conceived through IVF.

The new technology, assisted human reproduction through a revolutionary in-vitro gametogenesis (or IVG) could face the same backlash that IVF did. Currently confined to Western countries, IVG  could open the door to couples of the same sex, post-menopausal women, widows, single parents and possibly groups of more than two individuals, having babies.

If IVG becomes a reality it will be a great breakthrough and boon to couples seeking donor gamete options presently i.e. for testicular failure, premature ovarian failure and other conditions where no eggs or sperm is retrieved. So no eggs doesn’t necessarily mean no kids. IVG converts adult human cells into artificial gametes and eventually into lab-made eggs and sperm. These human cells can be taken from anywhere, inside a cheek or from hair or any piece of skin. After these cells are extracted, they are converted into gametes that could be combined to create an embryo in the lab and then be implanted in a womb.

IVG will redefine the family system of father, mother and kids. Furthermore, if gene editing like Crispr-Cas9 is added, it would make it relatively easy to repair, add, or remove genes during the IVG process, eliminating diseases or conferring advantages that would ripple through a child's genome.

In 2007 he demonstrated that he could do the same with human cells. Embryos are made up of stem cells and babies are the output of the maturation.

Following this discovery of pluripotent cells, scientists have been trying to replicate each stage of cell development to convert one cell into another using induced pluripotent stem cells (or iPSCs).

In 2016, two Japanese scientists, Mitinori Saitou and Katsuhiko Hayashi, wrote about how they had turned cells from a mouse’s tail into iPSCs and from there into egg and created eight healthy fertile pups, in a paper published in Nature. These mice were not only healthy but even reproduced.

Azim Surani and Siatou started working on identifying the alterations between how mice and human iPSCs become embryonic germ cells. In December 2017 came the crucial milestone concerning the eight-week cycle, after which germ cells begin the process of transforming into gametes. These scientists are trying to work with monkeys which are closely related to humans, the animals will be a good model for demonstrating whether their technology is safe in a primate.

Such significant trials, studies and the discussions in IVG have not yet started in India. “It will definitely take at least a decade before IVG can develop a human offspring. But once the breakthrough happens, it will be the greatest achievement in reproductive medicine,” said Dr Preethi Reddy of IVF - Consultant BirthRight by Rainbow Hospitals

The moral and ethical debate on ‘designer babies’ will begin in earnest once this process becomes a reality.

“What we have to bear in mind is the practical and ethical implications of this procedure. It involves several social scientific and legal issues, which also have to be addressed. The other important caution is the long-term implications on the human race caused by switching of cell types. Only when several generations pass will we  understand the risks involved in  this procedure,” said Dr Reddy

IVG raises the spectre of embryo farming on an unprecedented scale. The rate at which reproductive technologies are progressing is faster than the legal and ethical questions being raised.