The Jahagirdar’s College was established in 1923. But the elite of Hyderabad still chose to send their children to England. 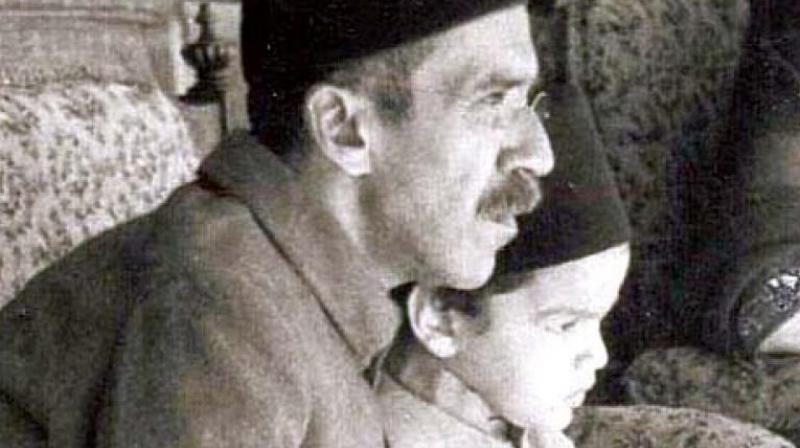 Where did the best families of Hyderabad send their children for schooling, in the Nizam’s Dominions? The Jahagirdar’s College was established in 1923. But the elite of Hyderabad still chose to send their children to England. Here is a story of how complex and unpredictable that process could be for one family. It was the family of the Nawab Wali-ud-Dowla. His father, Sir Vicar ul Umra, had been a Prime Minister of Hyderabad, and had married the 6th Nizam’s sister. Sir Vicar had sent his son to Eton in England. From there, the boy enrolled at the Royal Military College in Sandhurst and the University of Cambridge. In 1935, the Nawab died in Medina, leaving behind a large family. The eldest of his sons was then about eight. It was the Nawab’s wish that his sons be educated in England so his wife, the Begum Wali-ud-Dowla, sought the help of the Nawab’s classmate and friend at Eton, Sir Edward Cadogan, to help with admission to English public schools.

Cadogan, a former Member of the British Parliament, knew the Nawab’s love for Eton. He contacted the Headmaster there, but soon realised it would not be easy. In a letter to his friend Sir Findlater Stewart at the India Office, Sir Edward exclaimed that parents needed to put children down for Eton almost before they were born! At another school, Stowe, he learnt they had not started to take Indians there. Frustrated, he asked Sir Findlater for advice on what to do next.
These well-meaning people wanted to know the social and financial status of the family. The Secretary of State for India said he could not press any school to take these children, even though in the past they had done so. Stewart asked if Sir Richard Trench, a former member of HEH The Nizam’s Executive Council could “pass” the boys, and then the India Office could certify that they come from a good family and can pay their bills. The India Office wrote back, saying they had “no pull” with any of the well-known public schools.

Sir Richard Trench who knew the family well vouched for the family and recommended that Cadogan contact the Headmaster at another well-known public school, Charterhouse. Success at last. The Headmaster at Charterhouse was so encouraging that he was “almost threatening” to take the boys in! For good measure, Cadogan also wrote to Sir George Schuster, who was on the governing board of Charterhouse. Sir George had been in India, and was one of the people wounded when Bhagat Singh lobbed a bomb in New Delhi. Would he even have any sympathy for the educational needs of Indians? At any rate, Charterhouse agreed to take in the boys. The names were now on the admission list.

Two years later, with the school about to start, the Begum got the boys ready. Passages were booked for England. One last ritual remained — taking leave of the Nizam, called Ijaazat Lena (taking permission). By this time, Mir Osman Ali Khan, the 7th Nizam was in power. What was to be a pleasant goodbye turned immediately into a long nightmare! The Nizam was seated in the verandah of the King Kothi. After much bowing and the initial courtesies, the Begum explained why they were there. The Nizam stood up abruptly. In his high-pitched voice, he expressly forbade the boys from going to England!

The Begum poured her heart out to her friend, Amina Pope. She wrote to Sir Edward asking him to write the Nizam a letter. Pope thought that the Nizam would not want to let a British public school down. Sir Edward was confused. The Nizam had no role in securing the admissions for the boys. How, then, could he prevent their departure? He sought Sir Findlater’s opinion. The latter did not directly know the Nizam, but he consulted Sir Reginald Glancy who had served in Hyderabad and knew the Nizam well.

Sir Reginald thought that the Begum would be suspected of going behind the Nizam’s back and that the Nizam was unlikely to change his mind. In one swift moment, what Cadogan had worked to achieve in two years, vanished into thin air. After grieving for a short while, the Begum invoked her extensive network. Sure enough, they came through again. The boys then went to Doon School.

(Arvind Acharya is a management consultant in New York. He is working on a film on the life of Princess Niloufer. He can be reached at arvindach@gmail.com.)