Similar to the Tarana in Kathak or in Hindustani music, the Thillana is usually a crisp and racy piece that is compared to rap music. 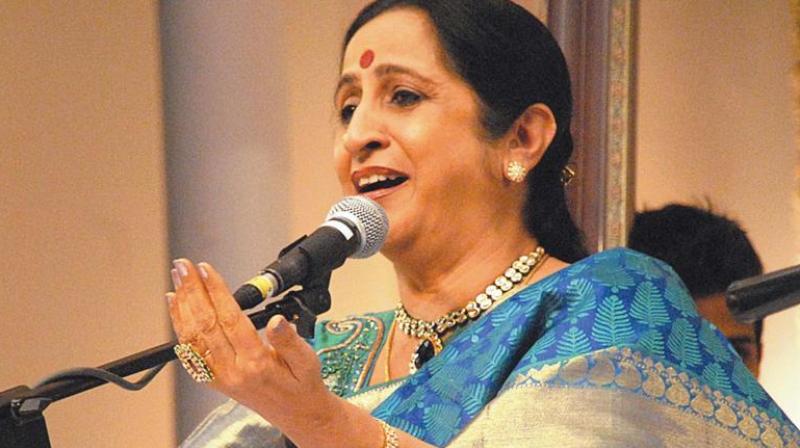 Carnatic singer Aruna Sriram takes the challenge of Thillana. And she revels in it.

A recent challenge on Twitter daring African Americans who say they invented rap to sing the Kalinga Narthanam Thillana (in Ragam Gambheera Nattai) may have led to many people taking a relook at some of the old compositions in the Carnatic and Hindustani traditions in which there is such huge variety of sounds and rhythms and ragas. Very few artistes in today’s Carnatic schools would take up the challenge of this particular Thillana. One who can take it in her stride is Aruna Sairam, the consummate artiste who is constantly reinventing herself.

While remaining deeply-rooted in the classical idiom, she looks beyond to what could be.  Whether it is in the way she carves a niche for herself through Abhangs and other devotional songs or in the way she creates a fresher feel with collaborations with international artistes, the Carnatic lore is being infused with sounds that complement and yet stand apart through these endeavours. Not all of it is everyone’s cup of tea, but it is something she identifies with and forges ahead with to make herself relevant in these changing times and fickle audience tastes. Language, cultures, differing traditions are no barriers and through it all she remains true to her core training.

And it is this core training that enables her to sing a range of Carnatic numbers whether it be a varnam, a padam or a javali, with equal ease; her deep throated voice is unique! She stands apart for the strength of her voice and the depth with which she sings. And what of the Thillana? The Thillana technically is for the braveheart — in music as well as dance. Some may argue that the varnam is the tough one, but not when you consider the Kalinga Narthanam Thillana (in Ragam Gambheera Nattai), one of Oothukadu Venkata Subbaiyer’s compositions. Also known as Oothukadu Venkata Kavi, he was an ardent devotee of Lord Krishna and many of his compositions are on Lord Krishna.

The Kalinga Nartanam is a much-loved and popular tale that describes the conquering of the many-headed serpent Kalinga by little Krishna and saving the river from being poisoned as also all the cowherds by this serpent. This also at another level means the conquering of the base instincts of any human being in the process of his/her evolution and can be interpreted at several other levels too (e.g. the kundalini). But for now it is simply a tale of great bravery and that of a compassionate God, who always rescues His devotees.

Born in the 18th century, this lyricist and poet has composed several hundred songs on his beloved deity, Krishna. His compositions are extremely popular, especially in a dance recital because of the bhakti bhava and the yearning that it exhibits. While they are plaintive and simple in their emotions, the complexity of his creations is evident in this particular piece which almost imitates the dance of the serpent as with the dance of victory by a little boy who moves like lightning over the generous hood of Kalinga. The verbal imagery is literal as well as visual.

Similar to the Tarana in Kathak or in Hindustani music, the Thillana is usually a crisp and racy piece and this particular one is part of the popular repertoire of Aruna Sairam who revels in the cadences and sound effects of this great dance. The phrases are so intricate yet so musical, that it is compared to the much more recent rap music. While this might offend and shock the purists, there is perhaps a grain of truth in it. Only that this gem existed so much earlier and is so much a part of a glorious tradition — it can hardly be compared to the genius of the composer — a simple man from the 18th century.

The composer perhaps had no real intention to sound dramatic. In his head this is a divine dance and what would it sound like? It is brilliantly worded and set to music in a way that it sounds like a whole bunch of sound effects strung together. Sing it properly and it is pure gymnastics of the voice!  And Aruna Sairam revels in it.  The rhythms change at the most unexpected places and the syllables require absolute mastery over the language and the cadences. Some may recoil in horror (as many did when Kunnakudi Vaidyanathan used his violin to produce any sound) as this is sung, but truth be told, they are few and far between.

While the song has been there for a long time, its re-emergence in the concert circuit as a catchy number drawing audiences across barriers is obvious.  The appeal is unquestionable and it also displays the vocalist’s command over the voice, the lyrics and the crushing pressure it places on the tongue. This also illustrates a perspective about the concept of voice culture — multiple words, structures and defined mastery representing also awareness and voice of the singer who knows the end of a beloved story. The experience explains, reflects and tracks complex shifts in learning and spirituality.