The ticket: Time world did it right for left-handers 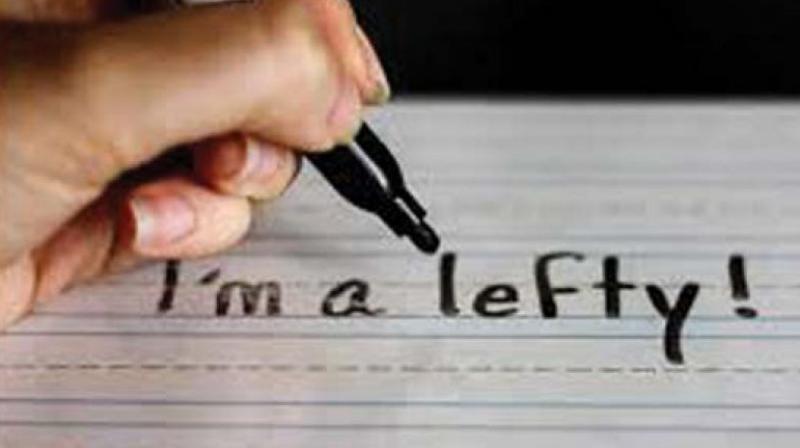 Left-handers have faced extreme and overt discrimination since time immemorial.

If God indeed plays dice with the universe, does She use Her left hand, or the right, to roll the die? We may never know, but a sustained human narrative for centuries sure has us believe that the Devil is a left-hander. There, perhaps, lies the root of a prejudice that haunts society even today, across India and several parts of the world. With estimates of over 10 per cent people globally being left-handed, it becomes a global bias as humongous as any religious, regional, race, gender, sexual orientation or physical handicap bias, with a strong negative impact on those who suffer the discrimination.

Left-handers have faced extreme and overt discrimination since time immemorial. In ancient Japan, left-handedness was a prime cause for quick divorce. In Latin, a southpaw was referred to as “sinister”, from the root “sinus”, or pocket since in ancient Rome, the toga had only a pocket on the left. In Sweden, doing things with the left-hand implies doing it badly or incompetently.

From language to design of everyday objects, habits to culture taboos and recommendations, there has been a sustained and cultivated deep-rooted bias against the “left”. The word “right” refers to not only a direction as opposed to the left, but also, “correct”. Left has almost universally become synonymous with ill-luck, incompetence, and bad.

Right is Right, Left is Wrong

In India, “right” is considered auspicious and left scoffed at in several religious rituals and social customs. But its impact goes beyond chiding a child for using the “wrong” hand. Bipinchandra Chaugule, president, Association of Left Handers of India, knows a thing or two about this discrimination. “Most significant set of activities where right is ‘thrust’ on children include eating, worshipping and handwriting. You can never receive prasaad, touch, lift, or hold any religious offering with your left-hand. By extension, because education too is considered a divine blessing, many parents, often out of genuine concern but ill-conceived and misplaced care, make a child change from writing with the left hand to the right.”

The impact is enormous. Imagine the plight of a child whose handwriting is bad because of being forced to write with a hand they are not comfortable with naturally. It can hurt their confidence, esteem and push them to be labeled below-average, said Mr Chaugule.

There are many tests to decide who is a classic or natural right or left hander.  Handwriting and eating are not the best tests because often, people have acquired it out of force. The more reliable tests are threading a needle, throwing a ball or a stone, and a test that nails it — using a hammer. Based on skills and competence, people might be classified into five groups — right-hander, left-hander, mixed hander (skilled in some activities with both), and ambidextrous, often confused with mixed, (equally good with both in several key activities), and confused-handers.

“Confused is a category as well as a creation. There are thousands, perhaps millions, who are confused about their handedness consequent to social prejudices and social pressure. There is also a small percentage of population who are confused-handers due to some neuro-physiological disorder or a brain trauma. Even the statistics about left-handers are not correct because of definitions. We believe that over 18 per cent of the population could typically be left-handed, not a mere 10 per cent,” he said.

There are all-too-evident proofs that almost everything in the world is designed for, though not by, right-handers. Buildings, vehicles, doors, machines, tools, classrooms — everything poses a difficulty for left-handers. For a left-hander, writing a script from left to right, as most languages are created, is difficult because the hand often covers the letter being written. So they move the sheet or shift away from the paper, often getting scolded by teachers, especially during exams.

In schools, the seating arrangement with benches aggravates the issue in such a way that if a right-hander is seated to the left of a left-hander, the elbow-jabbing is a routine problem. “Left-handers are not victims. We do not suffer from any handicap. We are adaptable and adjust well. Most of us do well in life. But there is little doubt that if you try to see the difficulties and challenges created for us — covertly and overtly, deliberately and by accident — we suffer,” confessed Mr Chaugule.

After the difficulties he himself faced, he started the Association of Left Handers of India, a body that has over 10,000 members. The association meets monthly in Pune and has chapters in most major cities across the country. Membership is informal, requiring no fees. “We discuss issues and challenges faced by left-handers and ways to fight back. We educate children in schools and try to sensitise parents and teachers to let children decide naturally which hand to choose for each activity,” he said.

There is no dearth of highly successful left-handers, despite studies which show subconscious bias against them to overt discrimination in careers. Internationally former US Presidents Barak Obama and Bill Clinton, former British Prime Minister David Cameron, versatile genius Leonardo da Vinci, great artist Michelangelo, scientist Albert Einstein, author H.G. Wells, technology entrepreneur Bill Gates and Hollywood star Bruce Willis are among the most legendary lefties. Even in sports, some of the greatest have been lefties — from Gary Sobers to Diego Maradona, from Martina Navratilova, John McEnroe and Jimmy Connors to Mike Tyson.

Most people who watched the recent biopic of the tragic Telugu actress, Mahanati, might have missed the beautiful scene in which the director highlighted that the peerless heroine Savitri was a left-hander. “Left-handed people have a bigger heart,” she says. Does it contribute to her tragic end, I wonder. In India, actors Amitabh Bachchan and Abhishek Bachchan are left-handers. Mahatma Gandhi was a left-hander, as, claims Mr Chaugule, is Narendra Modi, whereas Sachin Tendulkar, is not. “If he gives me five minutes, I will convince Prime Minister Narendra Modi that he is a leftie. Tendulkar, in contrast, despite writing with his left hand, is a highly balanced, mixed-handed, explaining his exceptional batting perfection,” Mr Chaugule said. Maybe God, rolls the die with both hands after all. Or hands-free, aided by a Siri or Google Assistant, just said the word.

(Sriram Karri is author of the best-selling, MAN Asian Literary Prize longlisted novel, AUTOBIOGRAPHY OF A MAD NATION, a columnist, speaker and a political consultant.)