The space race was indeed one of the highlights of 2017 and the current year is set to see far more of it. 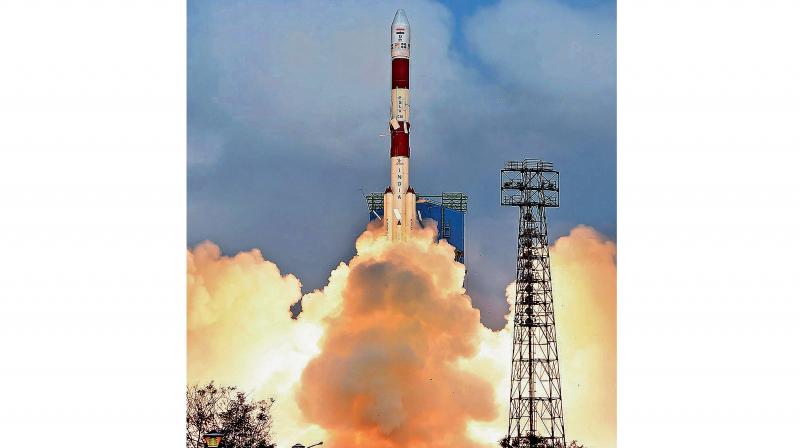 The PSLV takes off on its 40th mission from the spaceport at Sriharikota on Friday. The rocket placed 31 satellites into space.

The Indian man of the year, or should we say men of 2017 would have been the scientists of Isro. They placed so many satellites in one launch as to shake up the very foundations of the economy of the space race last year. They had one great failure in that year though when their IRNSS-1H launch off the PSLV-C39 vehicle failed with the protective heat shield not dropping off.  But that is to be considered just a stepping stone to the assured success of the missions in 2018 that promise to be most eventful considering the success of PSLV 40 on Friday. More satellites in space, including those of varsity students, a second mission to the Moon in Chandrayaan-2 and more work on Mars missions plus completion of the constellation of satellites for the configuration of Indian GPS system will make them the busiest space scientists of the year to come. They have started the year on a perfect note with a remodelled PSLV and proper heat shield separation that saw 31 satellites being placed into precise orbit. India’s defence preparedness would also be augmented this year by the Indian GPS. The competition is so severe there can’t be any reliance on foreign powers to come to our aid in strategic tasks, particularly in a feisty subcontinent.

India is also set to launch its heaviest satellite from Kouoru in French Guiana soon. The six-tonne beast GSAT-11, equivalent to the combined power of almost all communications satellite sent into the orbit by India, is to go up strapped to an Ariane 5 rocket, and will revolutionise the telecom sector, offering satellite-based internet services for the first time and rural India will benefit immensely from this.  The big bird is said to be the equivalent of 30 orbiting satellites and will once again help India punch above its weight in the matter of satellites in space.

The space race was indeed one of the highlights of 2017 and the current year is set to see far more of it. Elon Musk’s company Space X was also most active in 2017 with several innovations, not to speak of spectacular crashes too. But in sending up a used rocket to supply astronauts’ requirements to the International Space Station towards the end of the year, Musk had proved a point about the economy of the space race too. The launch failure rate is something he would probably have to work on to catch up with the solid reliability of the likes of Nasa and Isro.  The competition is not only getting so intense in the field now thanks to the proliferation of private players but also far more innovative. India may have had one bad experience in the last launch when the private sector was involved in the project, but that could well be an aberration. The difference between the weighty arm of a government and a private entrepreneur who thinks like the Richard Branson of space is that the private sector can dream big, which is very good for innovation. For government agencies, necessity will continue to be the mother of innovation, if not invention. SpaceX is, however, under a cloud after its latest launch of a billion-dollar super-secretive government satellite called Zuma with unverifiable reports indicating that the payload did not make it into the orbit. But the company itself said, “Information published that is contrary to facts is categorically false. Due to the classified nature of the payload, no further comment is possible.”  No one was prepared to comment on the real purpose of Zuma, a low-Earth orbit satellite made by Northrop Grumman and no one knows if it is up in the orbit or not. The spy satellite business is not new to Space X which has launched one for NRO and a space plane for the US Air Force.

Of course, in his flamboyance that comes with the territory for new age entrepreneurs, Musk wants to send his favourite car to the Mars. What is the purpose one might ask except to show off in the manner of a school kid with toys and a vivid imagination.

If we are to send astronauts to Mars — which is a human priority, according to Stephen Hawking, before the Earth becomes uninhabitable in the next few hundred years — we are going to need water for settlers as well as growing food for them and also hydrogen for the fuel to energise the trip back home. The Red Planet is said to be home to plenty of pure ice and humans may have to find a way to mine it from under the surface if they are to survive there. But long before we think of the Mars and the new missions towards the planet, Isro is intent on putting a lander on the Moon and experiments this month in Tamil Nadu will help prepare the spacecraft for the Earth’s own satellite.

Nasa has also been asked to prioritise the Moon again and its Orion spacecraft is slated to carry astronauts there again, more than 50 years after the pioneering space race saw USA land men on the Moon after the former Soviet Union had stolen a march by putting an astronaut in space earlier than the Americans.

The current year will, however, focus more on unmanned missions like the SLS and Orion, which will help prepare astronauts for the long journey to the Red Planet, a dream that Isro, too, is nursing. Exciting times are ahead and here is wishing all the space players the highest safety in the crucial months of many missions to come.