Born in 1978 in Mumbai to a single mom, Minda Dentler was paralysed from the hips down by polio when she was six months old. 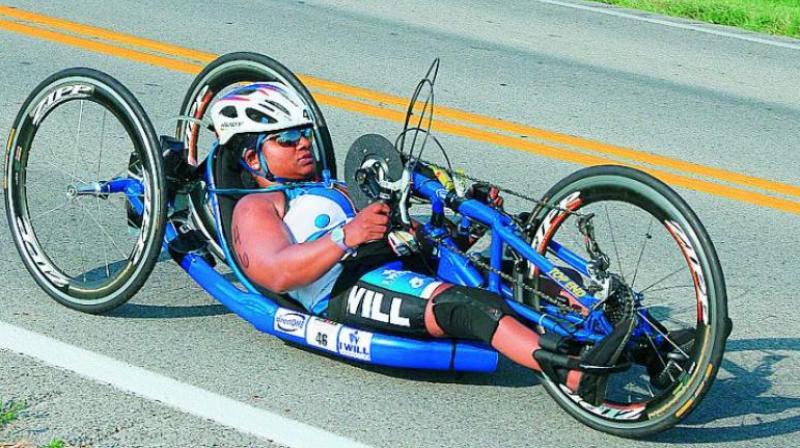 This opened up a new world of opportunity for her and she completed the New York City Marathon with her hand cycle in 2006.

Fear of failure is said to be the greatest barrier to one’s success, but it takes a very special soul to look beyond the fear. Achieving greatness is never easy, especially in the face of disability, and they not only make it look easy, they’re now forever disability superstars.

The saying “It is better to live one day as a lion than to live a thousand like a lamb” is often attributed to the Italian dictator Benito Mussolini, but no one knows its exact origin. However, it has a deep-rooted meaning.

How will your life be remembered? Each of us has an amazing opportunity to live large if we really want to, but it requires leaving the comfort of our familiar meadows and walking into the unknown pastures. Once you take that chance, though, you have made your days worthwhile, adventure is around every corner, and life is waiting to be devoured. If you were to write the book of your life, would you want to read it?

Everyone encounters hardships in their lives, but when someone with a disability is able to overcome it to not only survive, but to find mega success, that is an amazing thing to behold.

Born in 1978 in Mumbai to a single mom, Minda Dentler was paralysed from the hips down by polio when she was six months old.

The chances of such kids doing anything worthy in their lives in India is zero.

But Minda had the good fortune of being adopted by a loving family from the US.

“At the age of three I moved to Spokane, Washington, USA. Over the next few years, I underwent a series of surgeries and I could eventually walk with leg braces and crutches. My parents set the tone that having a disability should not prevent me from doing whatever I wanted to do with my life. I had to do the chores and do my homework. It was a very happy childhood,” says Minda Dentler.

When things in life go wrong, we often fall apart, stress out, or get depressed and sad. Yet in that very moment we could step back and consider that maybe, just maybe, the hard time we are going through right now is really just leading us to the most amazing situation we could ever imagine, and what lies ahead in this new situation is going to bring us success beyond measure.

“While living in New York, I met Dick Traum, the first amputee to complete the New York City Marathon in 1976. Dick later founded a nonprofit, Achilles International, which provides free training and support to help people with disabilities participate in sports. He gave me a three-wheeled recumbent bicycle propelled by the arms, and encouraged me to train for a marathon,” says Minda.

This opened up a new world of opportunity for her and she completed the New York City Marathon with her hand cycle in 2006.

“My next challenge was thought to be impossible for a female wheelchair athlete: the Ironman Triathlon. I made the transition to triathlon and finished my first Ironman in Louisville, Kentucky, USA, and qualified for the world championship in Kona, Hawaii, in 2012. I became the first female wheelchair athlete to complete the Ironman World Championship in Kona, Hawaii, within the same stipulated timings as meant for able bodied athletes. Every stroke in the water and crank forward on my handcycle were movements for those who could not lift limbs paralysed by polio,” says this amazing athlete.

Minda Dentler has completed 30 triathlons and four full Ironman events. She now works for a large global insurer. She’s an athlete, speaker, advocate and mother, and committed to inspiring people to move beyond their fear of failure and achieve their goals.

Fear of failure is said to be the greatest barrier to one's success, but it takes a very special soul to look beyond the fear and harness the strength to climb to greater heights in life. Achieving greatness is never easy, especially in the face of disability, and they not only make it look easy, they're now forever disability superstars.

As Asha Tyson, the writer and public speaker says, your journey has moulded you for the greater good. It was exactly what it needed to be.

Don’t think you’ve lost time. It took each and every situation you have encountered to bring you to the now. And now is right on time.