Russia has paid great attention to small and big details to make watching the ensuing football World Cup an experience to remember. 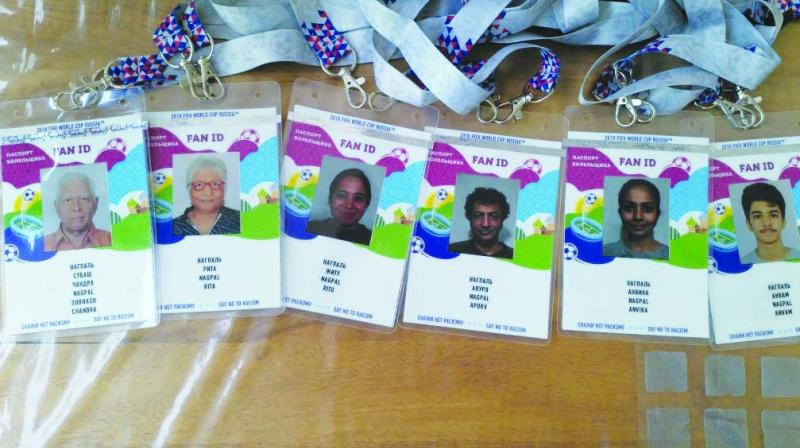 Russia has introduced this concept of Fan Ids.

I’m a veteran of 5 football world cups, have been to all since France ’98 — so am pretty well-versed with the whole process, how the ticketing works, visas, etc

And I have to say, Russia has taken things to simply another level — from a fan point of view — it’s simply extraordinary the facilities they are providing! And this, of course, against the usual backdrop of negative press in the Western Media — murmurs about how the facilities will be terrible, systems won’t work, etc. As someone who's also had the pleasure to live in Russia (for two years, 1997-1999), can assure you those preconceptions don't hold any water

Let me list down the specifics, what’s really impressed me — I am sure there are some areas where FIFA deserves some applause too but since I’m unable to differentiate here, am giving the credit to the host nation

Fan IDs: Russia has introduced this concept of Fan Ids. The moment you get a confirmed ticket through the FIFA ticketing process, you can apply for one, using your confirmation number. You need to fill in details about your name, age, passport, etc and within 72 hours (usually only 24) you get a confirmation number with your Fan ID. The advantages of a Fan ID are numerous... biggest of all being no visa is needed. Yes, you heard that right! No visa is needed for multiple entry and exits from 10 days before the World Cup and upto 10 days after. Important to point out that visas were free even for Brazil, if you had a confirmed ticket — but this takes it up several notches — by making sure you don’t even need a visa !

Public Transportation: Most World Cups — South Korea, Brazil — provided free public transport in the city on the day of the match, especially on the routes to and from the stadium. Russia has gone a whole trainload further.

A) They’re providing free public transport to Fan ID holders for the entire duration of the world cup (WOW!) — I am not 100% sure about this but what I’ve read so far, does lead me to believe this is true.

B) Given the distances in Russia, to make travel smoother, encourage people to travel they are actually providing free trains from one city to another, all conveniently scheduled around the match times.

So, for example, from Moscow to Sochi — a 2-hour flight that would normally set you back about 15,000 RUB for a return ticket — there is a 24-hour train each way that is completely free. As the friendly wording of the website goes — you don’t even have to pay for the blankets, even that is free! In fact, once we found out about this and did a couple of bookings, we bought tickets to another match in a small picturesque town (Saransk), which we normally wouldn’t have gone too, simply because of this fabulous facility.

The way we figure, we leave the night before from Moscow, arrive in the morning, walk around the city, eat etc, watch the match, and catch the late train back, arriving in Moscow the next morning. If you think about it, that saves two nights of hotel too — and for a large family like ours (we’re ten of us, including my parents) that is a significant saving !

C) What’s particularly awesome is the way the website is structured, the systems behind it. It has been open for at least the past 5 months, with all train data uploaded in tranches, the last one happening by Dec. 15 — that’s an amazing six months before the World Cup begins ! You can — with your Fan ID number + ticket confirmation number (it actually corroborates the two) —  book the seats of your choice. The site even remembers your previous info (and that of your co-passengers) with the autofill working like a dream. Have known other government websites, which seek much more important info, which aren’t as sophisticated as this. Kudos to the officials behind this website!

Security / Resale: All World Cups say that tickets can’t be resold and that spectators have to carry id with them but this has never actually been implemented. However — by making Fan IDs compulsory to enter matches (not your passport) and by giving so many benefits to having one, this has several knock down impacts.

A) This makes it very hard to resell tickets, as tickets bear your name — this is a huge issue for foreign spectators as usually the locals (as tickets are cheaper, easier for the host country) buy tickets only for the purpose of resale.

As a final coup de grace — the Fan IDs are actually couriered to your residence (you guessed it) free of cost ! We actually received ours, in India, and remember, this is still 6 months before the first football is kicked !

Family & Friends Seating: This is a small feature, added on this time and I’m sure it’s FIFA, not Russia who deserve the plaudits, but it makes such a huge difference.

Normally, while booking tickets — since only a maximum of 4 are allowed per match per person — if you’re a group larger than 4, like us, then your tickets for the same match, same category, can be in different parts of the the stadium (this happened to us in Brazil a few times). This time, in Russia — you apply for the tickets to be linked — a simple, online process — and your tickets will be together. As simple as that !!

One thing we learned while we were in Russia, almost 20 years ago, was never to trust the Western media when it came to their articles about this amazing country. Popular perception, therefore, cannot be further from the truth.

Summer in Russia, for example, is great, sunny weather (the temperature in Moscow can be as high as 35+ C). Systems run smoothly, flawlessly (the Moscow metro is famous for being on time — unlike say the London Underground) and the stations are so tastefully, artistically done, they could be used as ballrooms in most parts of the world. Given everything we’ve seen about the world cup, including the magnificent stadia being built, I’m sure even for World Cup veterans like us, this is going to be a FIFA tournament to remember !

The piece was first posted as a blog on LinkedIn.