Artificial insemination is practised widely by the dairy industry, but these researchers have proved higher success rates using shock waves. 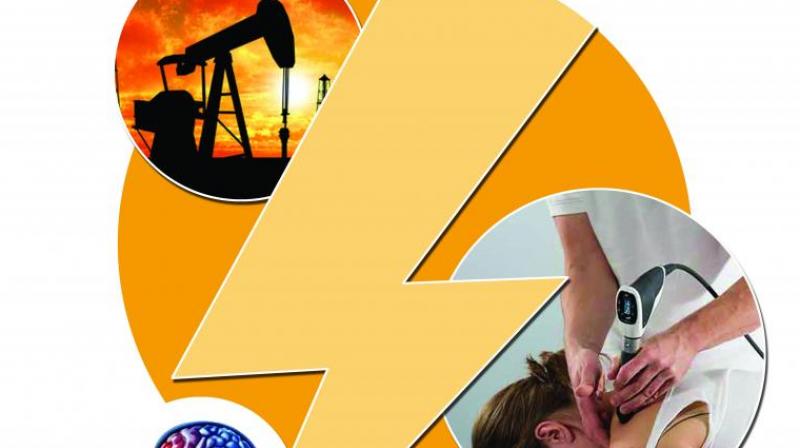 Shock! This word evokes images of damage and trauma, but not this tech

With four start-ups turning out products based on shock wave technology, and a couple more on the anvil, Prof. K.P.J Reddy and his colleagues at the Indian Institute of Science (IISc), Bengaluru, are certain about cash registers ringing for a long time. One of these start-ups exported the first tranche of ‘SuperBull’ guns to South Africa for artificial insemination of farm animals, and could dispatch some for wild animals as well. Over 10,000 of these guns have been sold to farmers in Maharashtra, Haryana and Karnataka to enhance the output of dairies through artificial insemination. Artificial insemination is practised widely by the dairy industry, but these researchers have proved higher success rates using shock waves.

Another start-up, Super Wave Technologies, has ventured to help ONGC in stepping up the production of oil and natural gas through rejuvenation of old wells. The third start-up — Srushti Education Systems Pvt Ltd — has been marketing ‘Reddy Tubes’ (named after Prof. Reddy) to students of engineering colleges as part of a nationwide drive to create awareness about multiple applications of shock wave technology. And the last one — Pulsewave Bioinvention Pvt Ltd — focuses on gadgets for treatment of prostate gland enlargement, traumatic brain injuries, and several urological disorders.  “I won’t be surprised if biotechnologists launch a start-up to employ this technology to increase the yield of crops through quick gene transfer,” says Prof. Reddy.

The team first developed a superior technique, refined by testing on several kinds of rocks and based on shock wave technology, to extract natural gas from deep under the earth. These researchers spent a lot of time sending shock waves into the rock and studying the cracks that open up as a result. Over the years, they have learnt to make these cracks at will and with precision. And their work caught the attention of the natural gas industry with ONGC signing up with their start-up to employ shock wave technology to open up fissures in rocks and old wells and thus increase the yield of petroleum and natural gas.

Soon, they figured out several uses for their technology, resulting in new start-ups, exploring a different business domain. In the field of medicine, Prof. Dhananjaya Bhat, professor of neurosurgery, Nimhans, Bengaluru, has been using a gadget based on shock wave technology to study traumatic brain injuries. “Civilians and those in armed forces are susceptible to brain injuries when blasts are set off by terrorists or during exercises. They suffer from loss of memory or speech a year or two later because the impact of shock waves show up later than usual. We have been using rats to study how blasts impact the brain and perhaps find a method of mitigation,” he told this newspaper.

Sans the technical jargon, a shock wave is a small area of high pressure and temperature in a gas or liquid that travels at supersonic speeds. The thickness of the area of high pressure and temperature is small, as small as one-millionth of a metre  but it is enough to cause many physical effects when it hits something. Shock waves are produced whenever energy is released in sudden bursts. In nature, they are produced during lightning, earthquakes, explosions and by supersonic aircraft. Crackers produce weak shock waves. Master whip crackers can produce shock waves at the tip of the whip, strong enough for wild animals in captivity to whine. And on the topic of wild animals, Prof. Reddy says he has initiated discussions with experts at CCMB, Hyderabad, to explore the possibility of employing the ‘SuperBull’ to increase the population of endangered species. “Cheetahs are definitely one of them,” he added.

This technology has found its way into tea plantations as well — drying of tea leaves often takes 16-18 hours — but when jolted with shock waves they dry up in 10 hours. Ditto with purification of water as all dissolved particles settle at the bottom so clean water could be siphoned off for drinking and cooking. “Some students have demonstrated that oil spills can be handled through shock waves.  So other uses could be discovered in future,” adds Prof Reddy.