Decaf   23 Apr 2018  Runversation: Running past the problems of life
Decaf

Runversation: Running past the problems of life

Everyone is unique in their own way. Some even take their disabilities to stand out. 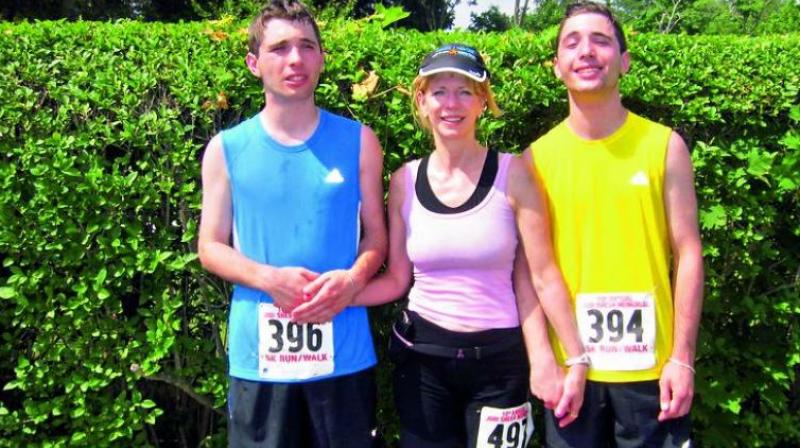 Robyn with her sons Alex and Jamie.

The environment we try to build around us has a huge effect on how we cope with obstacles in life.

Prodigies are born, not made (mostly). Success is not necessarily measured through exam qualifications, acquiring PhDs, IQs on the farther end of the genius scale or diligence beyond anyone. Super achievements evoke awe, wonder, and sometimes jealously. However, the achievement is even more appreciated if it is paired with an apparent physical disability.

Robyn and Allan Schneider, parents to twins Alex and Jamie, had their world turned upside down when a doctor confirmed that the twins had a severe form of autism requiring full day care. They were 17 months old. With no schools exclusively for such kids, Robyn and her husband, Allan, were on their own, taking care of the twins with a team of therapists and caregivers.

The parents were determined to give them the best they could. One thing that worried them was that the twins would not be included in any activity with their developing peers.Until the boys began to run in 1998 and the parents discovered that running made the boys very happy.

“We got to know of a running club that paired runners with those who had developmental abilities. The boys’ very first one-on-one runs with coaches resulted in a happiness and calm that was hard for us to believe. We could see the boys were smiling and overly excited as they approached us after the run,” said Robyn.

“That was a pivotal moment for us as a family, as our journey took in a new direction. Gushing with enthusiasm, they told us that Alex and Jamie were ‘natural’ runners with unlimited potential! Alex was fast and a running machine, he would just take off and wouldn’t stop unless asked to do so. Jamie is a social runner who stops to shake hands with volunteers at water stations, and waves to spectators. But, his running resume is just as impressive as Alex’s,” says the proud mother. Together, Alex and Jamie have run over 200 races including the prestigious New York & Boston Marathon. Alex, in fact, has a few podium finishes to his credit.

The environment we try to build around us has a huge effect on how we cope with obstacles in life. If you want to cope with the day to day challenges, sometimes, the only thing you have with you is your attitude and how you make the best of what happens to you.

“Race day is always a special and exciting day for us all. My emotions are high as I wait impatiently at the finish line. I watch first for Alex, and then Jamie.  And as they each approach the finish line, my heart pounding rapidly; I tearfully cheer, and think of how inspiring they are to so many, and how proud I am of their accomplishments.  After the race, as we celebrate among the crowd of runners, many will approach them and offer congratulations and high fives.  How grateful we are that we have discovered how much they love running,!” says Robyn.

Apart from taking care of her twins, running and advocating on behalf of those with autism, Robyn Schneider has written a memoir, Silent Running: Our Family’s Journey to the Finish Line with Autism.

Stephen Hawkins could hardly move his own eyes. Yet he made sense of Dark Matter and the invisible forces that shape our universe. Everyone is unique in their own way. Some people take their uniqueness or even disabilities, to stand out as different. Celebrate these people when you meet them because they are an immeasurable gift in someone's life. Sometimes, the part of life that is difficult brings other benefits, such as a sense of perspective or true value that people who lead easier lives can miss out on. It’s time to re-think thinking.