On the job: Gig economy takes you away from 9 to 5 grind

Technological advancements and internet penetration have given people opportunities to work even from remote areas. 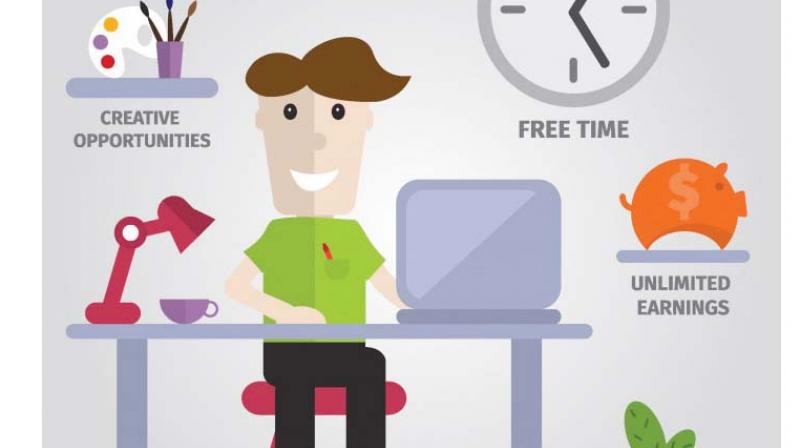 Industry experts believe that a mindset change has been driving the freelance model which allows corporations to tap multiple talents for the price of a single employee.

People around the globe are increasingly veering away from traditional employment models to undertake freelance work. The trend which has shown a sharp global upswing has been termed the ‘gig economy’. The Indian workforce is also undergoing significant shifts in the way it operates, with flexible work slowly becoming a preferred option for urban employers.

According to an EY report, the contingent workforce (a provisional group of workers working on non-permanent basis) has grown by 66 per cent in the past 10 years and nearly 50 per cent of organisations have seen an increase in their use of contingent workers over the last five years. In India, the trend has got an impetus with big firms like Wipro and Infosys hiring contingent workers on a project-to-project basis.

The boom
Ankit Dudhwewala, CEO of AppitSimple, explaining the growth of the trend, says that Indian companies are gradually realising the brilliance of the gig economy. “Freelancing has become a new trend and it has its own benefits — no additional workspace, no investment in training or recruitment and the freelancers are themselves responsible for their medical bills, retirement etc. It is not only the SMEs (small and medium enterprises) that have largely tapped into this pool of human resource, large companies like HCL are embracing freelancers too,” he said.

The freelancing model allows large corporations to tap multiple talents for the price of a single employee. Internet penetration has been a crucial force behind the boom. “Technological  advan-ces are also making both businesses and freelancers realise that plenty of work can be done virtually and remotely,” added Mr Dudhwewala.

Data shared by Freelancer.com, a global freelancing and crowdsourcing marketplace, highlights that out of over four million users from India, more than 3.5 million are registered as freelancers on the website, making India one of the biggest gig economies of the world.

Pratik Solanki, co-founder, Weybec Studio believes that “Many professionals choose to work independently because of the slow growth and monotony they experience in the 9 to 5 job format. Freelancing not only allows one to work on multiple projects but also empowers one with time flexibility”. According to a survey by fintech giant PayPal, freelancers in India on an average earn about 19 lakh per year.

The benefits
For advantage for freelancers is that it gives them flexible work timings, the independence to work from home, the assertiveness to choose the task they want and discard what they don’t, and also the ability to work for multiple organisations. For employers, it is cost-effective and it doesn’t require them to make room for a person in the office. “Small enterprises with space crunch are happy to hire freelancers on a project basis who offer unique expertise for the job,” Manas Gulati, co-founder and CEO, ARM Worldwide, said.

Technological advancements and internet penetration have given people opportunities to work even from remote areas, thus ditching the grind of the 9 to 5 job. Tahir Hussain, director of Amour Affairs, a Pune-based photography company, says one of the major reasons behind the gig economy’s boom is the self-realisation and experiencing new things and learning new skills. “Many believe this to be a vital part of their lives and are choosing to do multiple independent works, or gigs, as this sounds a better option rather than a fixed, salaried job,” Mr Hussain said.

Many industry experts also believe that a paradigm mindset change has been driving the freelance model. “It has been fuelled by the advent of the millennial workforce that believes in focusing on competency, experience and learning over job security or the traditional structures,” Zairus Master, CEO of Shine.com explained.

The issues
While the flexibility of the model attracts many, some major issues do plague the freelance model. Highlighting the downside of working as a freelancer, Mr Solanki of Weybec Studio points out, “Freelancing needs more effort and patience compared to a secure job, as the work inflow is inconsistent.” The inefficiencies in the finance and accounting department of the employer result in frustration among many freelancers about being paid correctly and on time, adds Ankit Dudhwewala of AppitSimple.

The trust-deficit between the employer and the freelancer stops many ventures from outsourcing. “Once the employer hires a freelancer, a lot of trust is needed not only in terms of payments but also with the deliverables according to the need of the hour.  There is a lot of coordination from both ends to execute the needful," explains Mr Hussain.

The way ahead
The scenario is changing with things getting more organised and businesses being able to diversify their workforce with greater ease than before. However, the positive change is a consequence of policies by individual enterprises and doesn't make an impact on the broader truth. Thus, there is a pressing need for the government to intervene and regulate the sector. Zairus Master of Shine.com says factors like job stability, additional perks, employee development programmes, and brand-employee relationship must be dealt with in order to brighten future prospects of the industry.

Meanwhile, it cannot be denied that the gig economy model is challenging the conventional industry structure and making players take another look at existing practices.