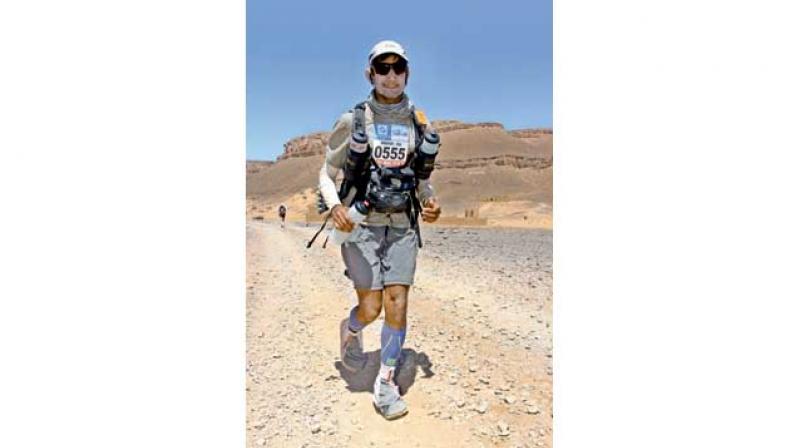 Sridhar Venkatesh during the epic Marathon of Sands

Marathon des Sables or the Marathon of Sands is a 250-km race across the Sahara that happens in Morocco each year. Sridhar Venkatesh recounts this soul-destroying run.

In his book, Sahara Unveiled: A Journey Across the Desert, the author William Langewiesche writes: ‘The Sahara remains a desert without compromise, the world in its extreme. There is no place as dry and hot and hostile. Now, imagine running 250 km spread over 6 days across the Sahara battling temperatures of 50 degree celsius carrying “must carry” provisions on their back which include their own food, spare clothes, a medical kit and a sleeping bag. The one thing you don’t bring to the race is water which is rationed at checkpoints on the race course. That’s Marathon Des Sables (Marathon of Sands), the race across the Sahara that happens in Morocco each year.'

The world is crazier than one thinks it is. Sridhar Venkatesh is the co-founder of an IT firm. When he’s not at work, you can find him on the beach training for a marathon. He ran this soul-destroying run in 2016. On his experience, he says, “It’s hard to describe. The energy from each step gets sucked into the desert sand, almost like you’ve made no effort at all. Everyone’s level of sportsmanship, motivation or goal is totally individual and for me my focus was on getting around the desert, on foot, intact, with all my kit on my back. Until you get out to the Sahara, and until you’ve experienced the sand and this boiling furnace heat, you have no real idea of what the Marathon of the Sands will do to you. And the true beauty of the Marathon des Sables is that no first-timer can ever truly know what they’re in for. Before you start, you sort of know that it’s going to be hot in the desert — and that it’s probably going to be painful. And blisters: you’re probably going to see a lot of them.”

Endurance running presents formidable challenges that may be difficult to appreciate fully before coming to a race, no matter how realistic one’s training might be. It’s a bit like parenthood. You can read all the books. Talk to all your friends. But nothing — nothing on this earth — can prepare you for that dazzling moment when, for the first time, you hold your own baby.

One may have run thousands of kilometres in training but on the race day one has to trust the process. Que sera sera; you have to believe in yourself and know that in extreme ultra races, the wheels will come off and you must pick yourself up and push through!

Sridhar says of the gruelling race, “The forbidding nature of the desert environment — the scorching day time heat and the cold at night, the sand and the wind, the merciless sun, all of these factors combine to make your racing much tougher than the distance itself would suggest. The route forays into landscapes so staggeringly unlike anything you have ever known that you feel awestruck, humbled, and very, very privileged to be alive and in a position to travel. Along the way, we covered astonishing terrain, classic sand dunes, some of the best ridge running, to rough and stony desert tracks, salt plains, and dried-up lakes and river beds. So, how to summarise such an epic event in my life? It’s difficult.

“It turns out I have all I need to shine bright, alone.”

Redefine your normal.The writer can be reached at gs.sudhakarrao@gmail.com