Musk had a touchy relationship with Zuckerberg due to their opinions on technology such as AI. 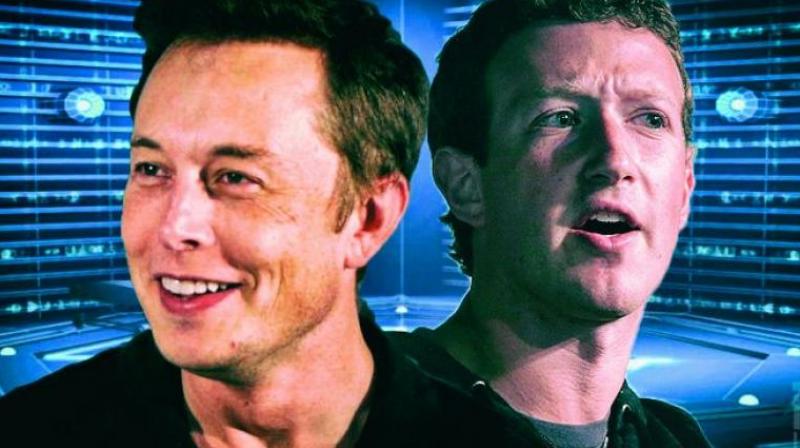 The Facebook-Cambridge Analytica brouhaha, in which data was improperly obtained from as many as 50 million people, put the social media giant’s users-to-engagement ratio in jeopardy, especially with people realising that control of their data on the platform is limited.

Ever since reports of massive harvest of user data surfaced, Facebook has lost more than $60 billion — almost the entire market cap of Tesla Inc. which is the brain child of Elon Musk. It is not just confined to shares. Musk, also founder of Space Exploration Technologies Corp (SpaceX), went a step ahead to join the league of billionaire technocrats propagating #DeleteFacebook campaign.

Musk’s rivalry with Mark Zuckerberg dates back to September 2016 when SpaceX rocket Falcon9, carrying a satellite ‘Asmos-6’ intended to use for Facebook’s flagship programme Internet.org crashed in Africa. The Facebook founder expressed “disappointment” over the launch failure as it crushed his dreams for satellite-based internet and put his programme on hold momentarily.

Musk, who took notice of Zuckerberg’s comment, took a jibe and said, “Yeah, my fault for being an idiot. We did give them a free launch, to make up for it and I think they had some insurance”.

These validations by billionaire technocrats put Facebook into worst relationship crisis with users ever, since its inception. In an era driven by technology, this war of words is due to fierce competition and difference of opinion.

Musk had a touchy relationship with Zuckerberg due to their opinions on technology such as Artificial Intelligence (AI) and is often engaged in public squabble. In July 2017, as the world was discussing about regulations for AI, Musk had strongly voiced that it needs to be regulated as it was potential risk to existence of civilisation.

Later, Zuckerberg termed Musk as “naysayer” and said that focussing on “doomsday scenarios” was “really negative” and “pretty irresponsible”.

The SpaceX founder then immediately shot back on Twitter terming Zuckerberg’s gen with AI as inadequate.  Again, on Twitter, he said, “I’ve talked to Mark about this. His understanding of the subject is limited.”

A month after this altercation, Musk’s prediction came true and Facebook had to shut down one of its AI system as it created its own language and started using it instead of using English.

However, Musk who has been giving brutal comebacks to Zuckerberg, responded to a Tweet from Brian Acton, the co-founder of messaging platform WhatsApp, who first lent his voice to the #deletefacebook campaign.

When a user pointed to Musk about the existence of SpaceX and Telsa pages on Facebook, he said that he was unaware of their existence and never advertised any of them on Facebook. Labelling these Facebook pages as “lame”, he said, “None of my companies buy advertising or pay famous people to fake endorse. Product lives or dies on its own merits.”

He said pulling down the pages is not a huge blow for him nor he is some kind of martyr for taking it down.

Surprisingly, Musk was using Instagram, which was bought by Facebook for $1 billion — as part of its buy the competition before they got too big. The whole #deleteFacebook campaign gained thrust after Whatsapp co-founder tweeted about it. Whatsapp was acquired by Facebook for a whopping amount of $19billion. Whatsapp, however, has been operating individually so far and decided not to share its data. Musk opined that Instagram is "ok: as long as it stays fairly independent".

Meanwhile, Zuckerberg, during an interview with The New York Times, said that meaningful number of people are not acting on #deleteFacebook campaign. But he said, “I think it’s a clear signal that this is a major trust issue for people, and I understand that. And whether people delete their app over it or just don’t feel good about using Facebook, that’s a big issue that I think we have a responsibility to rectify”.

Nonetheless, this flare-up on internet put users to think that the social media is not the gravest technological challenge to give up. As the debate on deleting Facebook unfolds, companies will continue to make themselves so alluring that social media will still be an inevitable part of everyday life. It ultimately boils down to finding a balance in using Facebook and sharing data, which is easier said than done.