It is because of their contribution that the school has a science lab, a computer lab which doubles up as a music room, and a modest library. 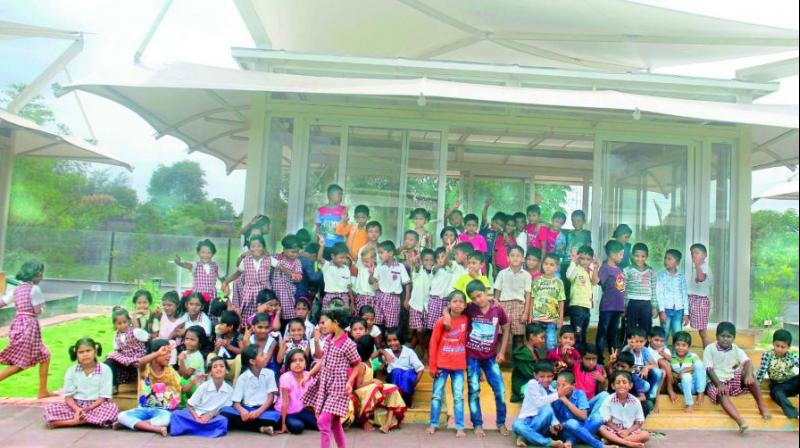 The Wablewadi Zilla Parishad School, Pune, went from being an obscure state school to having new-age teaching methods and state-of-the-art classrooms. Here’s what inspired this transformation...

Lush green vegetation, brown mud and a dramatic blue sky give Wablewadi, a small village in Shirur block of Pune district, a distinctly agrarian feel. Roads are unpaved and are flanked by fields and one-storey houses. Malls, high-rises, high-end cars and other markers of urban progress are conspicuously absent from the streets, making one feel that life here is modest and traditional. However, this façade is penetrated by a structure that sits snugly between these very markers. The structure isn’t a factory or a fancy shopping centre, but a Zilla Parishad school for local students.

Once a humble three-room structure, the Wablewadi Zilla Parishad School recently underwent an expansion as eight state-of-the-art classrooms were added to the original structure.

The new section of the school, which boasts an almost futuristic design, has classes up to the eighth standard and was inaugurated by the Chief Minister’s wife Amruta Fadnavis last month. The school is now known as the International Ojas School, and will follow the international curriculum of the Maharashtra International Education Board (MIEB).

So, how did the school achieve this awe-inspiring transformation? It’s because of the efforts of a certain Dattatray Ware, a school teacher who has been the driving force behind the advancement of the school. “From just 25-30 students, we now have 130 students in our pre-primary section, 400 plus students in our primary section and over 1,000 students on our waiting list. Students flock here from 25 to 26 surrounding villages,” says the 43-year-old teacher with pride.

The school has been around from the 1980s, but things began changing after Mr Dattatray was transferred to the school in September 2012.
“Advancement can only take place if teachers, the community and the government work together. We cannot leave everything to the government,” he says.

Mr Dattatray started off by improving the pre-primary section, and then introduced activity-based learning, which made parents sit up and take note. He held meetings to help parents understand the importance of quality education in a competitive world, motivating them to contribute towards the development of the school. On its part, the community has done a fair bit for the school. It is because of their contribution that the school has a science lab, a computer lab which doubles up as a music room, and a modest library. Their donations also helped set up a solar energy panel which powers the lights, fans and Wi-Fi in the school.

“The new section is built on land donated by 23 farmers,” Mr Dattatray reveals. “Because of a shortage of teachers, eight parents have volunteered to work as support staff and teachers. Their fees are paid by the community.”

The addition of the new section of the school is Mr Dattaray’s latest and most ambitious project, and was completed in one year. The design was conceptualised by Mr Dattaray himself. The box-shaped classrooms have a minimalist look with huge windows and no benches.

They are zero-energy classrooms as they have no lights or fans. “When I asked children where they liked to study, not a single child said in the classroom. They like to study in the open, where there is fresh air and lots of sunlight. Their responses made me come up with this design,” says the teacher.

Three of the eight classrooms are fitted with one-litre underground tanks for rainwater harvesting. The space also has a huge artificial turf which doubles up as a park, and a court for sports like volleyball, tennis and badminton. The entire section is lined with freshly-planted saplings of 350 varieties of indigenous trees.

Apart from the infrastructure, Dattatray has revolutionised learning in the school. His brainchild, the Foundation Course, is a new course that focuses on grooming children for JEE and NIT entrance exams right from the seventh standard. “The course is to prepare children for these competitive exams. The hope is to help at least 40 children from this school get into good colleges,” he says.

This course has also encouraged students to visit the lab and come up with their own technical wonders. Mr Dattatray says there is still much to be done. Next, the teacher is all set to green light the construction of an additional building. “The building will be constructed on land that has already been donated and will have classrooms up to the 12th standard. We want to make it of such a standard that international schools will want to affiliate with us,” he says.

When asked what motivates him to keep pushing the boundaries, this extraordinary teacher says that it’s because he wants to change the way people view government schools. “When you think of a government school, you conjure up this picture of dirty classrooms, inept faculty, and obsolete facilities. That makes people dislike government schools. But government schools are crucial, as not everyone can afford to study in a private school. Through this model, we hope to show people that government schools can offer good education, as long as people are willing to take up the responsibility and work hard,” concludes the teacher.