Tourette’s syndrome makes you blink, wink, clear your throat or even blurt out. 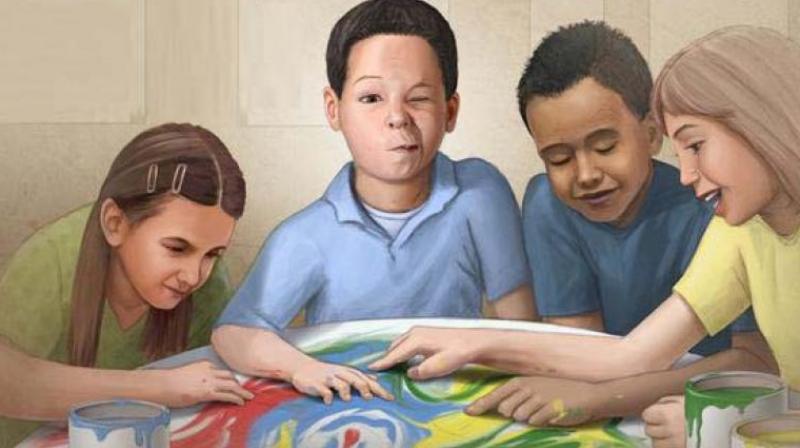 Recent community-based studies suggest that the prevalence of Tourette in school-aged children ranges from one to eight per 1,000.

When a child between the ages of 2 and 14 makes sudden, repeated movements or sounds — blinking or clearing her/his throat over and over again — it could be a symptom of an extremely rare developmental neuropsychiatric disorder called Tourette Syndrome that afflicts 0.3 per cent to 0.8 per cent of people worldwide.

Recent community-based studies suggest that the prevalence of Tourette in school-aged children ranges from one to eight per 1,000.

According to the Handbook of Clinical Neurology, tic disorders, including Tourette Syndrome, are an “intriguing group of paroxysmal movement abnormalities that begin in childhood, have a fluctuating course, are capable of causing psychosocial and physical problems, and often improve by early adulthood.”

The severity of the symptoms varies widely among people with Tourette, and mild cases may be undetected. Tourette is defined by the chronic presence of both multiple motor tics and one or more vocal/phonic tics.

Tics usually begin between five and seven years of age, are most severe in early adolescence, and then gradually decrease in early adulthood. About 90 per cent of patients with Tourette develop comorbid psychiatric conditions, obsessive-compulsive disorder and attention-deficit hyperactivity disorder (ADHD).

It’s a complex disorder likely caused by a combination of genetic and environmental factors. While the exact cause of Tourette isn’t known, there are several theories about its cause.

There is a strong genetic component with a familial linkage to Obsessive Compulsive Disorder (OCD).

Current studies suggest a single major autosomal dominant gene with pleiotropic expression and incomplete penetrance. Other recent studies suggest that several genes rather than one, and interplay between genetic and environmental factors, can cause the disorder.

Another theory blames abnormalities of neurotransmitter (dopamine) in midbrain neuronal pathway (mesencephalic-mesolimbic) system for disinhibition of the limbic system (brain networks). This is supported by differences in symmetry of the putamen and lenticular nuclei. Dopamine D2 receptor antagonists relieve some of the symptoms.

Tourette, however, can be cured by a procedure called deep brain stimulation (DBS).

It involves the implantation of a medical device called a neurostimulator or brain pacemaker, which sends electrical impulses through implanted electrodes to specific targets in the brain for the treatment of movement and neuropsychiatric disorders.

DBS was first used for treating Tourette in 1999. Over time, it has emerged as a highly efficacious treatment option for addressing tics in some of these cases after appropriate screening.

In the last 19 years, DBS has been used for more than 156 patients around the world. Two of these surgeries were performed by me.

One person for whom DBS worked was a 27-year-old Indian, who complained of uncontrolled tics from the age of five years. In his case, the complex motor tics involved repetitive and jerky movements of the head, throwing the head back, hitting on the chest with hand, flinging movements of his arms and so on. These symptoms continued to increase over the years. Despite the odds, he made a career as an animation expert. As the tics grew more severe, he had to leave his job and this led to depression and anxiety.

He visited several doctors, psychiatrists and received various treatment and medicines, but showed no improvement. Along with the motor tics, he also had vocal tics in the form of making sounds through the throat. He had marked anxiety and obsessive-compulsive behaviour. He had a room full of broken computer mice that he had flung about while doing his work.

After he started interacting with the online Tourette community, he learnt about DBS. He underwent a DBS surgery in June 2015. At the time of his discharge, he had 75-80 per cent relief from the symptoms. After a year, when he came for a check-up, he told us that he is “actively working”.