Sadly, political economy has pushed agriculture science to the background. 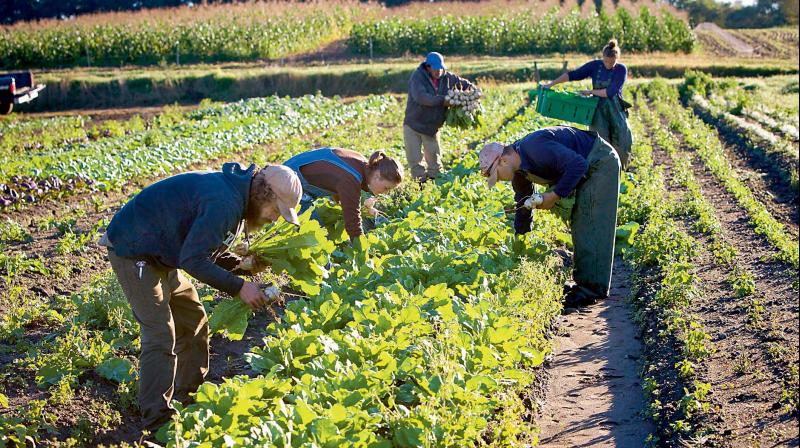 Science must address the problem of land degradation and water duty on crops to find solutions that are context-specific and resource sensitive.

An impending sustainability crisis looms over India’s agriculture and is beginning to manifest in farmers encountering profound scientific challenges, whose subject matter is fully comprehensible only to a handful of experts, and goes largely unnoticed by policymakers and the political class alike. Yet, its impact on what matters to us most — food security and nutrition, sustainable livelihoods, and inclusive growth — can scarcely be exaggerated.

Agriculture is trapped in a low-level equilibrium characterised by low productivity and large numbers of small and marginal farmers engaged in outdated modes of cultivation.

Real agricultural growth since 1960 has averaged about 2.8 per cent in India. The long-term growth in agriculture-GDP since the economic reforms in 1991 has remained at 3.4 per cent per annum, well below its potential. Agricultural growth remains volatile even today, because it is vulnerable to the vagaries of the weather — close to 52 per cent (73.2 million hectares area of 141.4 million hectares net sown area) is still rain fed.

The crisis of the sustainability of agriculture, characterised by widespread agrarian distress, is occurring at the intersection of three fundamental processes: degradation of natural resources — land, water, energy; extreme climate events — recurrent droughts and floods  resulting from climate change; and large numbers of people moving out of agriculture, leaving vast tracts of land fallow, typified by rural-urban migration. In sum, there has been a precipitous decline in agriculture.

Farming is the least preferred livelihood and the village is the least preferred home. This remains an irony because nearly half of an average household’s expenditure is spent on food and nearly half of the labour force is engaged in agriculture. Sadly, political economy — farmers being the oldest vote bank — has pushed agriculture science to the background, with an increasing peril. Interest in farmers is at a fever pitch. But the Central government raising the Minimum Support Price (MSP) to 50 per cent higher than the cost of production, and yet another state government announcing a humungous farm loan waiver, are both actions driven by vote-bank politics. This continuing upsurge in populism detracts attention from the urgent need to bring science back into agriculture.

The problem is fundamental and centres on land, water and climate change. Simply put, large tracts of arable land have turned into degraded soils — alkaline, acidic or saline. Water scarcity and water stress abound and is expected to worsen. Climate change is exacerbating the problem by challenging the farmer’s ability to deploy adaptation or mitigation measures. The data from the Indian Meteorolo-gical Department, marshalled brilliantly in the Economic Survey 2018, suggests that the average increase in temperature between the most recent decade and the 1970s is about 0.45 degrees and 0.63 degrees in the kharif and rabi seasons respectively, with a rise in the number of days with extremely high temperatures and a corresponding decline in the number of days with low temperatures.

The climate change model developed by the Intergovernmental Panel on Climate Change, predicts that temperatures in India are likely to rise by 3-4 degrees Celsius by the end of the 21st century. Assessing the impact of the changing patterns of temperature and precipitation will be a key area of research moving forward.

Agriculture must be freed from politics. The sustainability problem in agriculture will require a return to science — an alliance between science, social science and people science to forge a real-world response that will be evidence led, community-based and trans-disciplinary.

Science must address the problem of land degradation and water duty on crops to find solutions that are context-specific and resource sensitive. Social science must recognise that only a fundamental transformation at the level of households and communities can address this crisis, and drive community engagement to help incorporate environmental risks into their livelihoods and develop coping strategies contingent on available assets and community capacities.

People science needs to be mobilised to forge a collective will. The success of local mitigation action depends on community agency — the ability to participate not as mere beneficiaries but as agents of change — to mediate the incentives for individual and collective action.

The impact of extreme climate events is twice as high on rain-fed agriculture. The economic survey notes sombrely that farmer income losses from climate change could be anywhere between 20 per cent and 25 per cent in unirrigated areas. Agricultural research and extension will be vital for sustainability and to relieve agrarian distress in the foreseeable future.

We must cease to be prisoners to market distorting price support, subsidies, and loan waivers, and recognise the strategic importance of placing science in the forefront of the agriculture reforms agenda. Have governments the sagacity to do this, or will we continue down the slippery slope of bad economics and bad politics?