Leopards would start getting active in the late evening. 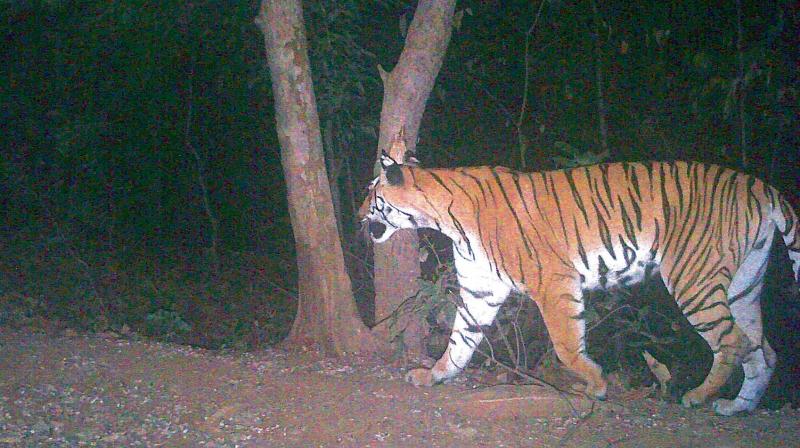 With the human footprint expanding around the world, more and more wild animals are becoming active at night, finds a study.

If wild animals were to restrict their living to areas devoid of humans, there would hardly be any wildlife as there are very few areas in the world without any human influence. Therefore, wild animals have to adapt and they do, by using human-use areas. This was substantiated by a recent study by Kaitlyn M. Gaynor of the University of California-Berkley. Her team found that across the globe and across mammalian species — from deer to coyotes, and from tigers to wild boar — animals are becoming more nocturnal. It stated that human activities of all kinds, including non-lethal pastimes such as hiking, seem to drive animals to make use of hours when we are not around. Such changes may provide some relief, but they may also have ecosystem-level consequences.

The team examined anthropogenic effects on mammal diet, activity patterns, conducting a meta-analysis of 76 studies of 62 species from six continents, which revealed the strong effect of humans on daily living patterns of wildlife.

“Animals increased their nocturnality by an average factor of 1.36 in response to human disturbance. This finding was consistent across continents, habitats, taxa, and human activities. As the global human footprint expands, temporal avoidance of humans may facilitate human-wildlife coexistence. However, such responses could result in marked shifts away from natural patterns of activity with consequences for fitness, population persistence, community interactions, and evolution,” read the study.

It shows that because these animals are so scared of humans they keep away from them by either not occurring where humans are or by adapting in many ways that allow them to share space with humans with minimal confrontation, as for example using the same land when humans are asleep.

This is also what our study in the agricultural areas of Ahmednagar district showed — that leopards were mainly inactive in the daytime when people were up and about, although they used to sit right in the middle of a tall crop with people around. In the night, when rural India shuts down and there is hardly any human activity, wild animals use the rural landscape.

Our study found that leopards would start getting active in the late evening and in the dark hours go near houses to attack livestock and/or to prey on dogs.

Human-use landscapes are extremely rich in resources for animals like leopards because of the high density of livestock that people keep with them.

The smell and call of the cattle attract the predators that come to feed on these animals at night.

Our study also found that despite such shared spaces — where five adult leopards used an area of 100 sq. km and where human density was around 400 per sq km — deaths of humans due to leopards does not occur, although accidents do happen when humans and leopards bump into each other, resulting in injuries to people. Such shared landscapes, though, require a different way of dealing with the wildlife, as we cannot simply make them wildlife sanctuaries.

We need greater awareness on the issue and more research on human-wildlife interactions. The territorial wing of the forest department (those in charge of such areas) must be well-equipped and trained in dealing with wildlife emergencies as well as humans in a humane manner, especially when there is loss of life and property due to wild animals.

Wild animals are careful to use human-use landscapes at a time when people use it the least and they go out of their way to avoid humans. Therefore, it is incumbent on us to also take steps to ensure that we focus on the safety of human lives in such areas where wild animals are also present. We also need to ensure that livestock loss and crop damage due to the presence of wildlife is minimised in a quick and just manner.

In India, such shared spaces are old phenomena as humans have lived in this part of the world since thousands  of years. They have adapted to each other’s presence.

(The writer is an ecologist who has been working extensively on human-animal conflict for years. She has been a research associate with Wildlife Conservation Society.)