Slime, a squishy material that people love to poke, is trending globally. 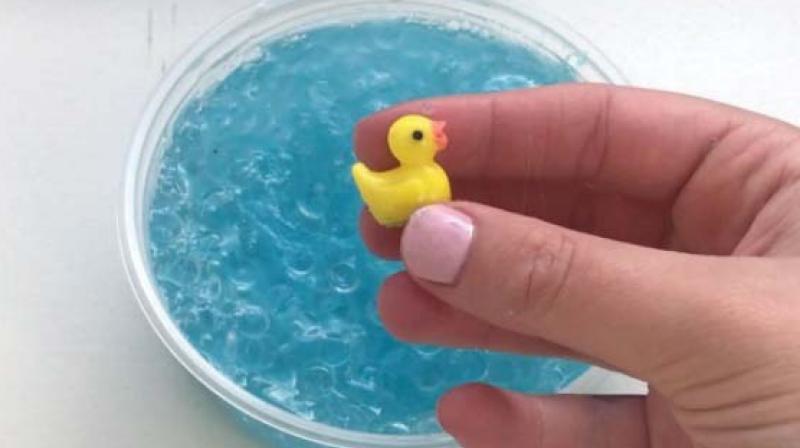 The basics of the trade are simple — have fun making stretchy goo, make a video playing with it between well-manicured fingers, ship according to the demand and restock. (Photo: @glitter.slimes)

Slime. The word invokes a weird sensation, mostly of disgust. So, how has this yucky substance become so popular on Instagram, and how is it turning even young girls into entrepreneurs?

The basics of the trade are simple — have fun making stretchy goo, make a video playing with it between well-manicured fingers, ship according to the demand and restock.

What makes these videos popular and slime a product worth buying is something called an Autonomous Sensory Meridian Response (ASMR), which relaxes your brain and replenishes your senses. “ASMR is an experience of a tingling sensation on the skin which starts from the scalp and extends to the back of the neck, spine and rest of the body,” explains Dr Maneet Walia, clinical psychiatrist, Credihealth. She says that slime videos work as a trigger as they involve repetitive behaviour, which is connected to the sense of touch and can prove to be very soothing for some people.

If you were to search for #slime on Instagram, the result page would be flooded with videos of colourful slime that’s available in textures as varied as bubblewrap and glittery surprise! Most slimes have a fragrance as promised on the label, the fruity ones being absolute bestsellers. A trend in the world of slimes is that many slimers tend to not reveal their identity. In sync with this trend, the owner of Hue, The Indian Slime Shop, refused to tell us her name, but she revealed a few trade secrets to us. She says, “I like to use vibrant and bright colours because I feel they make my videos more distinctive and attractive. The resulting visuals are aesthetically pleasing, and with so many varieties available, it’s a definite win-win.”

Slimers are part of a helpful community that share recipes and help each other get better. “There are many accounts that actually give you suggestions if you ask them and if you were to ask me about sharing a tip, I would say that the slime in your video should be clear and in focus with the background score being noise-free,” she says.

If one were to consider the business of slime making, it is impossible to ignore how empowering it is. Ayesha K., 12, is the owner of an Instagram account called Pastel Slimes. Based in Mumbai, this Class VII student has already created a niche for her DIY slime products on the social media platform. Nivya K., Ayesha’s mother says, “A year ago, she started experimenting with different substances to create slime. In June this year, after successfully creating a few original recipes, she started selling those on a bigger scale. I feel really proud of the fact that she doesn’t require much help from us and handles almost everything.”

Ayesha says that initially her science teacher explained how slime works. “This helped me in experimenting with different materials to create new textures,” she says.

It’s not all fun and games though. Slimes are also used for therapeutic purposes. “They are considered to be great stress-relieving objects for those who are fidgety or suffer from anxiety,” says Dr Walia.

The secret of the popularity of slime videos is that you don’t even have to touch slime to reap its benefits. Just watching the colours and textures of the substance being kneaded and handled can be very soothing, she adds.

It is easy to wonder if there is an aspect of sadistic pleasure connected to slime videos as the slime is essentially flattened, distorted and pounded upon in the videos. “You cannot purely associate these videos with a sense of violence as ASMR is a personal experience. We all perceive the same things in different ways, and the same is true for slime videos,” she adds. Vaishali Narayan, who is studying to be a Chartered Accountant, recently bought slime online and says, “Personally, I love the childlike glee I experience on poking around with it. I love how it moulds into whatever you want.”