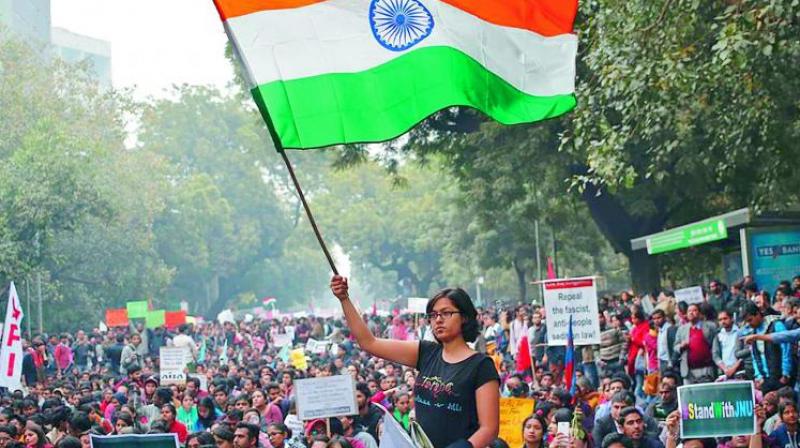 Students constitute the most idealistic, impressionable and impulsive segment of society. They are in the vanguard of social change. They are national assets and must be allowed to bloom. University and college campuses are great altars of learning where students start thinking freely and are able to demarcate right from wrong. As William Shakespeare wrote: 'There is nothing either good or bad but thinking makes it so.' It is on the campus that ideas and thoughts are dissected by an emerging generation.

Unfortunately, intolerance is growing. The Film and Television Institute of India witnessed turmoil in 2015 when students protested against the appointment of its chairman. Earlier, in 2014, the police bashed up students at Jadavpur University when they demonstrated peacefully demanding an investigation into the molestation of a female student. Neither campus has really recovered since. The malaise is spreading to other universities.

Why is this happening?

Intolerance is being engineered. The liberty of thought, expression, belief, faith and worship is being curbed.

The culture of "toe my line or get hounded" is becoming rampant. Intellectual space to listen/appreciate a contra view is shrinking. Every other freedom and right becomes meaningless unless there is freedom of speech and expression, guaranteed under the Constitution.

As Tagore said: 'Where mind is without fear…where knowledge is free…where words come out from the depth of truth…where mind is led forward…into ever-widening thought… into that heaven of freedom…let my country awake.'

Students are becoming pawns on the political chess board. Course contents bristle with political flavour. Ideology of a particular kind is being injected. Free thinking and the freedom of expression is being stifled. The situation presents a dismal picture and the biggest casualty is academic excellence.

Policy makers must take lessons from student movements across the world.  In France, students have been shaping public debate. They are treated with respect and taken seriously by the authorities. Recently, Chile witnessed a student-led nationwide protest seeking a new framework for education. A few years ago, in Hong Kong, students protested against the introduction of Moral and National education. Some 40,000 students protested and the government had to yield. In 1967, 100,000 students held a rally in the UK in the aftermath of suspension of two students at the London School of Economics. Such examples abound across the world.

Fortunately, in India, in August 2017, the Supreme Court delivered a landmark verdict in the Right to Privacy Judgment. A nine-judge bench, in Puttaswamy vs Union of India, held that the right to privacy is an intrinsic part of the right to life and personal liberty under Article 21 of the Constitution.  The freedom of privacy now stands guaranteed by Part III of the Constitution. Privacy has both negative and positive facets, ruled the Supreme Court. The negative content restrains the State from committing an intrusion upon the life and personal liberty of a citizen. Its positive content imposes an obligation on the State to take all necessary measures to protect the privacy of the individual. This verdict of the Supreme Court, read with the preamble of the Constitution, firmly protects the freedom and speech and expression on the campus.

One hopes that after this judicial pronouncement, campuses will become more tolerant. Our students are national assets, not liabilities. Politicians beware, lest the education system be irreparably dented!