Needs more than the law to oust sexual harassment

A common response of most women who have accessed the formal system is how unprepared they were to deal with the hostility of the system. 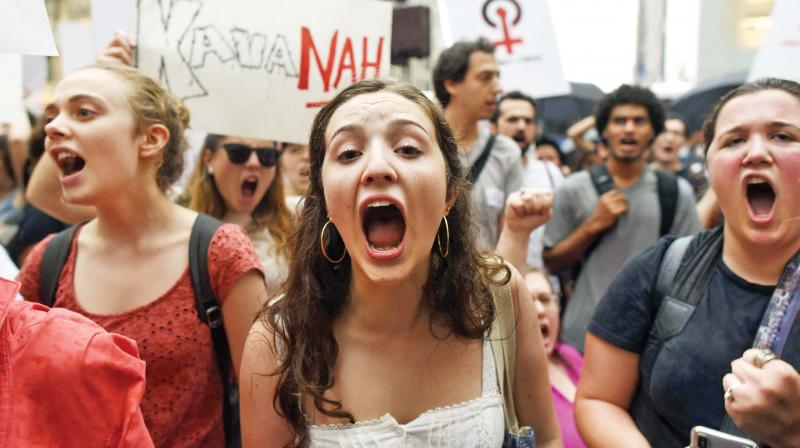 Women hold a protest in New York against Supreme Court nominee Brett Kavanaugh accused of sex assault. World over women are coming out and exposing those who had assaulted or harassed sexually. (Photo: AP)

I do not refer to this systemic callousness to dissuade complainants but to alert them to the need to build internal reserves and external support to do battle.

Personal testimonies of a number of women who have experienced sexual harassment at the workplace show how the procedure of internal complaints committees is no more than an eyewash, a strategy to sweep the issue beneath the carpet and somehow rescue the embattled men.

Faced with such evidence, one common response is to ask institutions to not try to play judge and jury but just hand over the matter to the formal legal system and let the law of the land take its course.

This celebration of the formal legal system does not account for the tribulations of a long-drawn-out trial, which may or may not believe the complainant. Rupan Deol Bajaj had to fight right up to the Supreme Court before her complaint against K.P.S. Gill was seen to have basis, and then, too, the court admitted her loss without really punishing him.

Faced with such stonewalling from both institutional and state redressal systems, when Raya Sarkar crowdsourced a list of university harassers and put it up on the internet, her naming and shaming methods were condemned for compromising fair process by attributing guilt without proving it.

The above analysis has brought out the shortcomings of both the standard and the non-standard remedies. Since suffering in silence is not an option, it is important to reflect on how to address predatory non-consensual behaviour. How to deal with harassment in a society predisposed to believe the harasser instead of the complainant?

In what follows, I wish to share as a kind of socio-legal first aid, my views on the matter.

A common response of most women who have accessed the formal system is how unprepared they were to deal with the hostility of the system. This lack of preparation comes from the belief that a victim of a wrong has to do no more than report the committing of a wrong to the enforcement authorities. Once the report is received, the designated authorities would do all that is required to punish the wrongdoer.

What is often not realised, especially when you are the victim of a wrong, is that investigation and trial precedes conviction, and punishment follows conviction. The process of investigation and trial cannot happen without the complainant, yet the complainant has little or no control over either process. In order to retain control, the first question that a complainant should ask is whether to seek relief from the formal system or non-formal ones. A non-formal system could consist of peers of the complainant, peers of the perpetrator or other right-thinking people who could be asked to intervene.

At all points the complainant should dwell on how she wants her wrong redressed. A rap on the wrist from the immediate community, a community probation order and a public apology are all possible options. A complainant may wish to reflect on the sufficiency of these remedies not just from the standpoint of the wrong and the wrongdoer but also from her own standpoint: which kind of remedy would enable her to both reprobate reprehensible conduct and move on in life.

For these possibilities to be explored we need immediate communities that would be willing to take an allegation of sexual harassment seriously and act against it. There are situations where the formal system would have to be activated. When that happens, it is important to go prepared for hostility rather than cooperation. Moreover, the formal system would operate on its prefabricated definitions of harassment and the sanctions to be imposed on persons guilty of such conduct. Scant regard would be given to the subjective experience of the complainant and the remedies desired by her.

I do not refer to this systemic callousness to dissuade complainants from fighting for their rights but to alert them of the need to build internal reserves and external support to do battle. Barriers can only be crossed if their existence is acknowledged.

The rhetoric of rule of law can be used as strategy but this strategy would work if it is accompanied by a realist understanding of the legal system. The failure of formal and non-formal systems to give serious consideration to complaints of sexual harassment has caused women to devise naming and shaming strategies to subvert the misogyny and sexist prejudice which permeates the everyday practice of both law and society.

The absence of fair procedure raises dangers of wrongful naming and inflicting harm which cannot be set right, even when truth is discovered. Anger and desperation have caused women to resort to these practices and thereby obtain some momentary advantage. The fact that women both individually and collectively are willing to go so far should be cause for introspection for all, and a call to universally condemn sexist behaviour whenever it is noticed, no matter how insignificant the incident.

It is evident in this moment, where more and more women are finding that silence is no longer an option, that a change in societal attitudes is long overdue.

Whether that change is to be born of fear of public censure, or out of self-reflection and the building of codes of respectful conduct among all humans, is a decision we have to make.