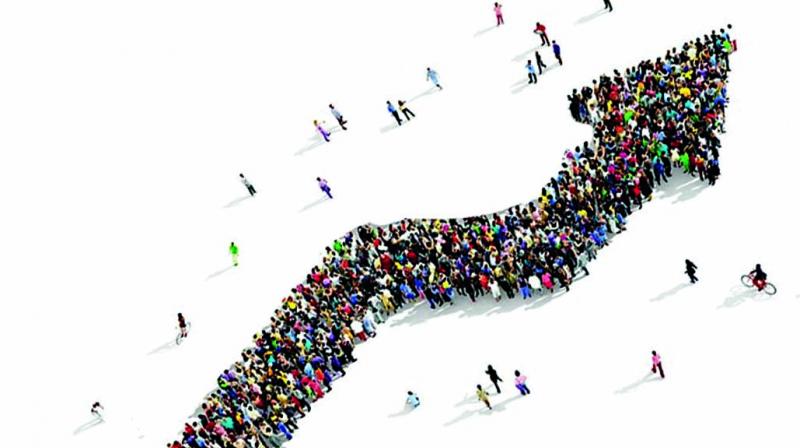 Even as casual traveller holidaying in Kerala some 15 years ago, the vibrancy and wellbeing of the people, their communities and the regional environment was notable.

I’ve been fortunate to visit India on several occasions. Travelling to Uttarakhand to meet the women of the Chipko movement; trekking through the beautiful Spiti valley over the snow-clad Pin Parbati pass; crossing the hot plains of the Punjab, and plying the lush backwaters of Kerala by boat. I can claim some acquaintance with, and great affection for India and its people, but I don’t presume to lecture anyone, rather to make some observations concerning human population and its impacts upon our shared planet.

During my lifetime (I’m 61), the world’s population has more than doubled from 3 billion people to 7.7 billion today. Over that time, concentrations of carbon dioxide have tracked a comparable growth curve. In May, the Mauna Lao observatory in Hawaii, which has been monitoring atmospheric carbon dioxide since 1958 (the year of my birth), recorded CO2 concentrations of 414.8 parts per million,  closing on the 450 parts per million threshold at which scientists warn of catastrophic climate change .

True, the majority of accumulated carbon dioxide added to the atmosphere since the Industrial Revolution can be laid at the door of the developed world. But over the last 50 years, the developing world has been catching up. The top four emitters of carbon dioxide by country are China, the US, the European Union, and India. Per capita the picture is very different, with the high-energy use, high-consumption life-styles of citizens of US, UK, and Australian citizens responsible for many more tonnes of carbon dioxide emissions annually than the average Indian citizen and certainly of most Africans. If everyone in the world replicated the average American’s lifestyle, we’d need five planets to sustain us.

Case closed? The onus is entirely on the rich, western world to curb its excessive consumption and it’s nothing to do with population… Not quite. Current overconsumption, dominated by the developed world, must be addressed. But separating consumption from population is too simplistic.

Over half the projected growth of 2.2 billion more people on our planet by 2050 is set to occur in Africa. Individually, Africans have some of the lowest per capita carbon dioxide emissions anywhere. As an extreme example, a citizen of oil-rich Qatar is responsible for 450 times the emissions of someone living in Niger — where individual carbon emissions are just 0.1 tonne CO2 equivalent, but where birth rates per woman are amongst the highest in the world averaging 7 children per woman. But rapid and continuing population growth means that whilst Africa’s per capita emissions have decrea-sed over the past 40 years, the continent’s overall emissions have more than tripled.  More feet, more heat.

Alongside climate change, the other existential crisis we face is the collapse of biodiversity globally. Also published in May, the findings of the Intergovernmental Science-Policy Platform on Biodiversity and Ecosystem Services (IPBES) that one million species are at risk of extinction raised international alarm. The IPBES affirmed an earlier study published in the Proceedings of the National Academy of Sciences detailing declines in 1000s of vertebrate species worldwide, which was notable for describing this in a scientific journal as ‘biological annihilation’, and evidence of ‘the current magnitude of Earth’s ongoing sixth major extinction.’

Both reports identified human population, alongside and in harness with economic growth, as an indirect driver of over-exploitation and habitat loss. As to solutions, the IPBES assessment stated, “changes to the direct drivers of nature deterioration cannot be achieved without transformative change that simultaneously addresses the indirect drivers.”   Similarly, in its most recent report, the International Panel on Climate Change highlights economic and population growth as, “the most important drivers of increases in CO2 emissions from fossil fuel combustion”, concluding that further high population growth will make it impossible to hold global temperature rise at or below the critical 2 degree threshold.

Human population growth and economic growth in harness exacerbate these existential challenges. It is right and long overdue that a much greater proportion of people globally deserve a fairer share of the Earth’s resources — a form of ‘contraction and convergence’. Unfortunately, there is little evidence of any contraction of consumption amongst developed countries, whilst a growing number of people in developing countries are emulating unsustainable, high consuming lifestyles. The global ‘middle-class’ is estimated to grow from around 3.2 billion at presentto 5 billion by 2030 with China and India home to the most rapidly growing cohorts.

Even as science highlights population as a key factor driving both climate change and biodiversity loss, some commentators promote the complacent notion that human population growth has ‘peaked’, that fertility rates are falling universally and that population growth will soon plateau. That’s not what the United Nations Population Division believes. Its most recent 2017 projections show no plateauing anytime soon. Instead, they warn that population growth is far from over and that their medium projections will only be achieved if there are ‘continued improvements’ in access to family planning and healthcare,

“The current world population of 7.6 billion is expected to reach 8.6 billion in 2030, 9.8 billion in 2050 and 11.2 billion in 2100. With roughly 83 million people being added to the world’s population every year, the upward trend in population size is expected to continue, even assuming that fertility levels will continue to decline. To achieve the substantial reductions in fertility projected in the medium variant, it will be essential to support continued improvements in access to reproductive health care services, including family planning, especially in the least developed countries, with a focus on enabling women and couples to achieve their desired family size.”

The UN’s most striking projections reflect the vital importance of sustaining universal downturns in fertility rates: if on average there is just ‘half-a-child more’ per woman, the UN estimates there will be 16.6 billion people on the planet by 2100. ‘Half a child less’ and our population will stabilise at around 7.3 billion, fewer than today. That tiny difference of ‘half a child more or less’ per woman (better expressed as one more or less child every second family), results in a huge variant of 9.2 billion more or fewer humans on the planet by 2100. That lower projection is eminently achievable through ethical, non-coercive and positive means. There is no need, or any place, for measures that abuse human rights, as resorted to in the past by both China and India. As proven by the exemplary cases of Kerala and Tamil Nadu, where proactive, positive programmes investing in community health and access to education, have reduced fertility rates to around 1.7 children per woman, below the replacement level. Enabling girls to stay on at school breaks the cycle of child marriage; access to family planning empowers women to choose when and how many children to have, allowing them to fulfil their potential and become more economically active in their community. Such initiatives and outcomes are as relevant for the UK as India. At Population Matters, we work with doctors in deprived communities in the Midlands, where teenage pregnancy and school dropout rates are amongst the worst in Europe. Learning from and following the ‘Kerala Model’ in Nottinghamshire has been critical in reversing that trend.

Addressing the unmet needs of women across the world would have the greatest impact in curbing climate change. In 2014, Paul Hawken founded Project Drawdown to find the most substantive, ‘available today’ solutions to climate change. Collating the work of hundreds of scientists, campaigners, and business entrepreneurs across the world, Project Drawdown compiled a list of the ‘Top 100 Solutions’, then refined down to the ‘Top 10’. At 6 and 7 were ‘Educating girls’ and ‘Family planning’. It was clear to Hawken that these overlapped. To his amazement, when combined they rose to the Number 1 solution, saving more carbon emissions globally than from all global onshore and offshore windpower. And they did more than ‘just’ cut carbon. “Educating girls lays a foundation for vibrant lives for girls and women, their families, and their communities. It is also one of the most powerful levers available for avoiding emissions by curbing population growth. Women with more years of education have fewer and healthier children, and actively manage their reproductive health.”

Even as casual traveller holidaying in Kerala some 15 years ago, the vibrancy and wellbeing of the people, their communities and the regional environment was notable. Addressing both population and consumption benefits people and planet.

(The author is director of Population Matters, a UK-based charity which campaigns to achieve a sustainable human population, to protect the natural world and improve people’s lives)