Discourse   16 Dec 2018  Yoke of conversion: For dalits, it’s out of the pan into the fire
Discourse

Yoke of conversion: For dalits, it’s out of the pan into the fire

It’s true conversion was a gateway to a better life, free of the yoke of casteism. 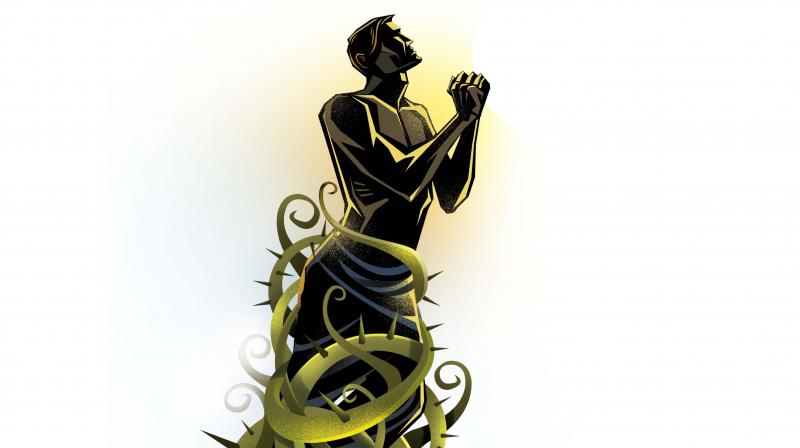 Christian Dalits are worse off than their Hindu counterparts as the former do not have the benefit of the constitutional measures though they are subject to the deprivations, discriminations and indignities.

It’s true conversion was a gateway to a better life, free of the yoke of casteism. But for Dalits, born again into the Christian fold, the oppressive system continued as the Jesuits imbued it with caste-oriented hierarchy

It is an undeniable fact that for centuries Dalits were caught up in the iron grip of caste, were subjugated from their birth to death and were made to slog as the slaves of the upper castes. It is equally undeniable that this gruesome history of oppression was broken, strangely in the colonial foreign rule of the white man and a new history of upward mobility for Dalits was set in motion. The new legal and educational systems introduced by the white man and possibilities of gainful employment, quick transportation facilities and creating a new and positive self-image for themselves by adopting a new religion in the guise of Christianity opened up new vistas, till now undreamt, for Dalits.

Tamil writers like A. Madhaviah, Pudumaipithan and others have recorded in their writings how Pariayars, Muslims and Nadars (in those days Nadars were also considered untouchable), escaped the domination of the upper castes, thanks to their change of religion. So for Dalits, Christianity and Islam became an asylum and safe haven from the brutal caste atrocities and violence. Maraimalai Adigal too has corroborated this, and said that thousands of Dalits embraced Christianity and Islam just to escape from the clutches of the caste fanatics. He claimed that even one-third of the Indian population changed their religion for this reason. While there were many who ridicule these conversions and brand the converted Christians as “rice Christians”, there were others who affirm the positive fact that these conversions happened not because of the allurements of acquiring material benefits but because of their deep urge to escape the miseries of untouchability and live a life of equality and self-dignity like other human beings. In short, they fondly hoped to recover their lost humanity in the new religion.

Caste Hindus naturally feared that if Christianity grew in strength, then the foreign rule would continue. Therefore, they opposed religious conversion and very ingeniously made Christian religion look like another sect of Hinduism by cleverly exporting Brahminical ideology and caste into it. They didn’t have much of a problem when only the untouchables became Christians. In fact they tolerated it and treated it like just another religion of untouchables. Later, a few upper caste Brahmins and intermediate caste Hindus, chiefly Vellalars opted to become Christians for the sake of gaining in the colonial rule, power and pelf, property, lucrative employment and other assets.

Christian Missionaries, under the leadership of Jesuit Missionaries, encouraged this trend. Pioneering Jesuit Missionaries like De Nobili and later Constantius Beschi were the leading lights and they made sure that the caste rules and gradations were followed as strictly in this Hindu version of Christianity as it was followed in Hindu religion.

Brahminical ideology and caste left its hideously dehumanising imprint on every aspect of Indian Christianity. Everything was dyed in caste, including its sacred liturgy, theology, priesthood, religious life (they renounced everything else except their caste!), church leadership, and even the graveyards!

So the religion of Jesus of Nazareth, the Prophet of justice, peace and fellowship, who took relentlessly till his death the side of fishermen, the sick, children, women, the poor, the marginalised, outcastes and humiliated people, became through a strange degenerating metamorphosis, a casteist religion, a religion that permitted and promoted untouchability. Even today this situation continues more or less.

Dalit Christians are an overwhelming majority in the Church (more than 65 per cent), yet they are dominated and marginalised by the so-called upper caste Christians who are a minority. The latter occupy positions of power and authority and lord it over the Dalits, depriving the latter of their rightful place in the Church.

For Dalit Christians it is an everyday struggle for their rights within their Church just as their Hindu folks struggle for temple entry in many places. Both are still untouchables in their respective religions! In a way, the Christian Dalits are worse off than their Hindu counterparts as the former do not have the benefit of the constitutional positive affirmative measures though they are subject to the deprivations, discriminations and indignities which are the lot of Dalits everywhere. Nothing is gratis for Christian Dalits: their religion indeed is a costly faith for them!

(The writer, also known as Bama Faustina Susairaj, shot to fame with her autobiographical novel, Karukku. Her novels focus on caste and gender discrimination in Christianity and Hinduism. Her works embody Dalit feminism.)