War of words over post-colonial space

Common people across age and disciplines had picked up arms to revive the right to live in their own country with respect and dignity. 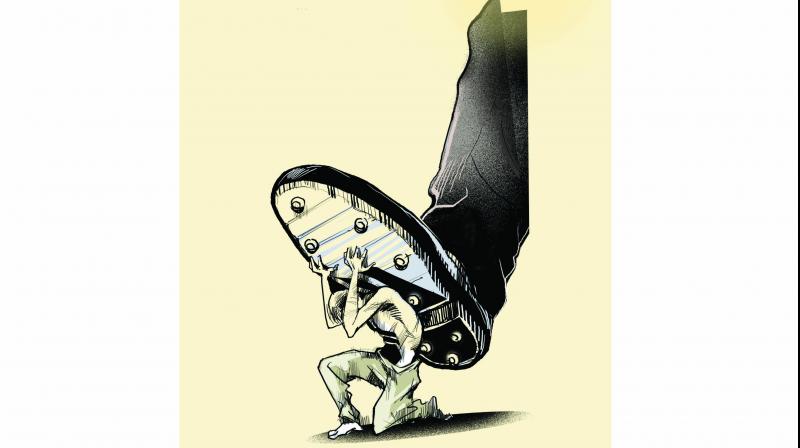 The modern State of Nigeria has emerged from British colonial rule (1800-1960), leaving behind stories of cruelty and humiliation.

Chimamanda Adichie's remark deriding post-Colonialism was supposed to be sarcastic but lacked the sense of occasson, which got Shailja Patel all riled up and furious.

Humour has always been a great tool to draw audiences. But when carelessly employed, it can boomerang into an outrage where sensitivity, emotions and gratitude are ruthlessly questioned. This is what happened with feminist author and poet, Chimamanda Ngozi Adichie’s interview at The Night of Ideas event in France, on January 25, when she dismissed post-colonial studies as a “scholarly section created by professors in need of jobs.”

The immediate reaction was a stream of protests, fuming at Adichie’s arrogance and ignorance of her country’s deepest scars, and of the immense struggles to create the path and provision that allowed someone like Adichie to rise.

Shailja Patel, Kenyan poet and author, was quick to express her disappointment, even anger and indignation, through a series of 14 tweets, which have been noticed and appreciated in the context of Adichie’s casual shrug towards post-colonial theory. Expectedly and rightly, so!

For the uninitiated, post-colonial theory is the study of colonial domination and its aftermaths. Theorists specialised in the field draw from a range of disciplines such as history, literature, political theory, economics, and cultural studies to understand the ins and outs of that powerful global enterprise called colonialism and the ways in which it continues to define our lives today.

The modern State of Nigeria has emerged from British colonial rule (1800-1960), leaving behind stories of cruelty and humiliation. Those battles aren’t over, yet. Often, global media and public attitudes, and even the arts, across the world, reflect these prejudices, passed off as a ‘harmless’ reference to the Africa of yesteryear.

That’s exactly where Shailja Patel’s outrage stems from. In her tweets, she points out how the academic feminists and post-colonial theorists of Nigeria had worked relentlessly to furnish a platform that allows great talents like Adichie to educate, breed, and grow. With a carelessly placed statement, the famous author argued that the protests against prejudices were “nothing but academic muse of African intellectual groups”.

The world still nurtures pre-conceived notions of under-development when it comes to looking at ‘native’ Africans with a liberal mindset. The same was reflected brutally when accomplished French journalist, Caroline Broué asked Adichie before a house-full audience at the Night of Ideas, a cross-continental cultural event held by the Institut Francais at the Quai d’Orsay, “Are there bookshops in Nigeria?”

Sensing that the positioning of the question had gone terribly wrong, Broué tried to ‘explain’, but the damage was already done.

More than the journalist’s question, though, Patel seems to be disheartened by Adichie’s response which was vague and inconclusive, other than the sarcasm of “I think it reflects very poorly on the French people that you have to ask me that kind of question.”

In her tweets Patel suggested a rather blunt and hard-hitting reply: ‘Yes, but they lack books and journals because the World Bank and IMF forced Nigeria to de-fund public education’, which she feels Adichie would have come out with had she understood and respected the contribution of post-colonial theorists in her own upbringing.

It was later discussed that Broué’s question was meant to be ironical, and Adichie’s “Post-Colonial studies” statement just an extension of her funny side. Unwilling to let go of it as a momentary slip, Shailja pointed out that the celebrated author shouldn’t have trivialised such questions with casual humour since it is reflective of poor taste, especially because even her negligence becomes headlines...” Patel’s hurt is relevant and relatable.

India has its own history of colonial rules, and for years the country has been molested by invaders, the largest interface being with the British. The Indian struggle for Independence against 200 years of British rule has gone through savage means as the war was between those who wanted to sabotage the original voice of the country and those who tried to protect it.

Common people across age and disciplines had picked up arms to revive the right to live in their own country with respect and dignity.

On the other hand, arts and literature played a potent role in and after such gory times, fearlessly and unapologetically creating moments of fiction and non-fiction that can influence and inspire mindsets. The thinkers and scholars, literary personalities, intellectuals and journalists, who attempted to envision an independent country, had survived or succumbed to social brutalities. Each Indian is sensitive to those stories of loss. The twitter wars will die down eventually. Sooner or later, her world will forgive Adichie as well. It is heartening, though, that scholars like Patel resonated so perfectly, the combined outburst of a larger population, her discomfort echoing in every heart with a similar history.

Koral Dasgupta is an author, entrepreneur, professor and content consultant based in Mumbai.

1 Jallianwala Bagh Massacre | Peaceful protesters defied a government order and demonstrated against British colonial rule in Amritsar on April 13. 1919. They were blocked inside the walled Jallianwala Bagh and fired upon by Gurkha soldiers under the orders of Brigadier Reginald Dyer, killing nearly 2,000 unarmed people.

2 Famine on 1943 | In 1943, up to 40 lakh Bengalis starved to death when Winston Churchill diverted food to British soldiers and countries such as Greece while a deadly famine swept through Bengal.

3 Partition of India | In 1947, Cyril Radcliffe was tasked with drawing the border between India and the newly created state of Pakistan over the course of a single lunch. Over 10 million people were uprooted and the situation quickly descended into violence. At least one million people lost their lives in communal killings.